At the Sharp End of Lightning

AT THE SHARP END OF LIGHTNING. The interwoven fantastical tale of family, of loss and sacrifice, of unexpected gifts and coping with disability and new abilities set against the backdrop of climate change occurring across parallel worlds. In Oceanlight, Yalara Narika, a winged Sea Sprite, searches for her lover over immense seas only to find catastrophe and realization that her world is in turmoil.

Meanwhile in the safe suburban normality of North Wales, Einion Morgan Alban, a restless youth afflicted by a disease of the blood, is nearly murdered by a man in a white suit. Yalara and Einion must discover the causes of their near-deaths and their as yet unrevealed connections as they both face upheaval to their lives and their worlds.

My novel “At the Sharp End of Lightning” is the first of a book series that explores the issue of real climate and environmental change affecting the planet we live upon using the approach of fantasy writing and parallel/multiverse worlds. Woven into the book series are fantastical elements, how characters deal with disability and ability, and elements of Celtic history and mythology. In the book, several characters find they are able to pass between worlds through a thinness that separates worlds—a well-used literary device in fiction. The history of fantastical literature is littered with portals and gateways between worlds and times—from Alice transported through the looking glass (Lewis Carroll), to the childrens’ discovery of Narnia at the back of the clothes filled wardrobe (CS Lewis) to Lyra Belaqua’s explorations in His Dark Materials by Phillip Pullman. This oft-used approach allows the writer to transport their characters into a different time or place and explore their response to such happenings. In my own book, the chance for characters to discover and explore different worlds—passing through thinness between worlds—allowed me to use this approach as a context to explore different future climate change scenarios.

My use of the term “thinness” in the book does also partly relate to the Celtic traditions associated with finding of a “Thin Place” in the landscape. Nowadays, the term “Thin Place” has a multitude of meanings—with arguments for a pagan, or pre-Celtic or Celtic Christian or biblical sense to a “Thin Place”. All of these meanings ultimately refer to a special place where the veil or barriers between this actual world and a spiritual world—to the Celtic Otherworld or with a more theological connotation—is lessened. My own view of a “Thin Place” is that its’ a special place where one can meditate—it has an otherworldliness to its nature or something out of the ordinary. Often these places occur in the wild, or at the periphery of human habitation—on an island, a hill, a cave, or somewhere off the beaten track.

My first experience of a “Thin Place” was upon Bryn Euryn—near Rhos-on-Sea in North Wales—a woodland and grass covered hill, with the ruins of the 14th century Llys Euryn or “Palace of Euryn” next to the house I grew up in. The hill features in my novel as the playground of one of my characters, Einion Morgan Alban. The actual hill, Bryn Euryn, is now a park, but was a place of wonder for me as a child, where, once tired of playing or making dens, I could contemplate the world of the Irish Sea, fields and town that surrounded the hill. It was and still is a special place for me. My wife Margaret and I recently visited Bryn Euryn a few months ago, and its otherworldliness still touched us. On the path to the ruins of Llys Euryn, we encountered a trail of discarded feathers—almost equal in number to our footsteps—of many different birds. We could hardly believe it, but the feathers seemed to lead us to the ruins! It doesn’t really matter if Bryn Euryn is a special place or simply an ordinary place of trees, shrubs and grasses. In my mind, it is a “Thin Place” where I can connect to something—memories of childhood or whatever it is—outside of myself. 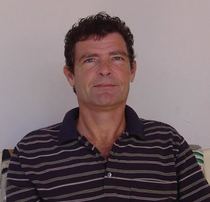 NR Bates was born in London, grew up in Wales, and lived in Canada and Bermuda. He shares his life with his wife and his house with seven cats, one dog and the subtropical wildlife of lizards, wolf spiders and ant colonies that seek out a better life indoors.He is an oceanographer and scientist, and has published more than one hundred and thirty scientific papers on ocean chemistry, climate change and ocean acidification. He is a Senior Scientist at the Bermuda Institute of Ocean Sciences and Professor of Ocean Biogeochemistry at the University of Southampton, UK.​His novels focus on epic fantasy and magic realism, and inspired by his deep love of the ocean and environmental sciences. He has also recently published a small book of short-stories set in Paris, entitled “The Fall of Icarus (The Elevator, The Fall of Icarus, and The Girl)”.