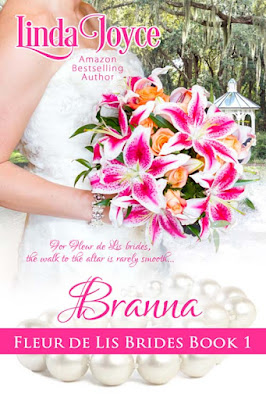 Perfectionistic Branna Lind has found true love with James Newbern, but the winds of Hurricane Katrina have pushed their wedding date into an uncertain future. She can’t wait on Fleur de Lis to be restored to marry James. They need to wed pronto, before she reveals news sure to shock her family.
James is determined to protect Branna. Since their engagement, his gun toting ex-fiancée has been dipping into crazy. He’s certain she’ll settle down after the wedding, but when she steals Branna’s heirloom pearls—her something old for the wedding—James takes matters into his own hands. And despite Branna’s ranting, he’s not agreeing to a quickie Vegas wedding. His fiancée will be a Fleur de Lis bride, just as tradition dictates. Or he’ll die trying.
The path to “I do” is more challenging than Branna and James ever imagined, but they’re determined to get their happily ever after. 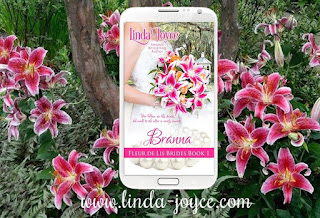 Linda Joyce is an Amazon Best Selling author and 4-time RONE Award Finalist who writes about assertive females and the men who can’t resist them. She has three series: Fleur de Lis, Fleur de Lis Brides, and the Sunflower series. She’s penned two novellas, Behind the Mask and Christmas Bells, which will be released in December.
Linda’s a big fan of jazz and blues. She attributes her love of those musical genres to her southern roots, which run deep in Louisiana. If you walk-through several New Orleans cemeteries you’ll find many of her people buried there. She’s lived coast to coast curtesy of her father’s Air Force career. She penned her first manuscript while living in Japan, the country where her mother was born and raised. Now she lives in Atlanta, Georgia with her husband and General Beauregard, their four-legged boy.

“Who would do this?” she wailed.
Bed linens, scooped from the bed, were piled in a heap on the floor. The mattress ruined by a large X from corner to corner, looked naked and raw. A bedside lamp had been smashed against the wall. A gaping hole in the drywall sprouted pink insulation.
“Miss Lind. Do you have any enemies? This appears to be a threat or a message rather than a burglary. Can you identify anything taken?”
“My pearls?”
James stepped away. She raced to her dresser, her heart thudding faster than racecar pistons, she yanked on the top dresser drawer. A moment of hope shot through her as she reached for the dark blue velvet box.
The string of perfectly matched, white pearls were gone. Her wedding would be incomplete without that special something old. The thief had robbed her unborn child of a precious family heirloom. “Oh, God.” 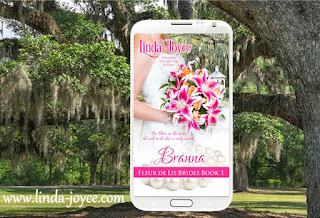