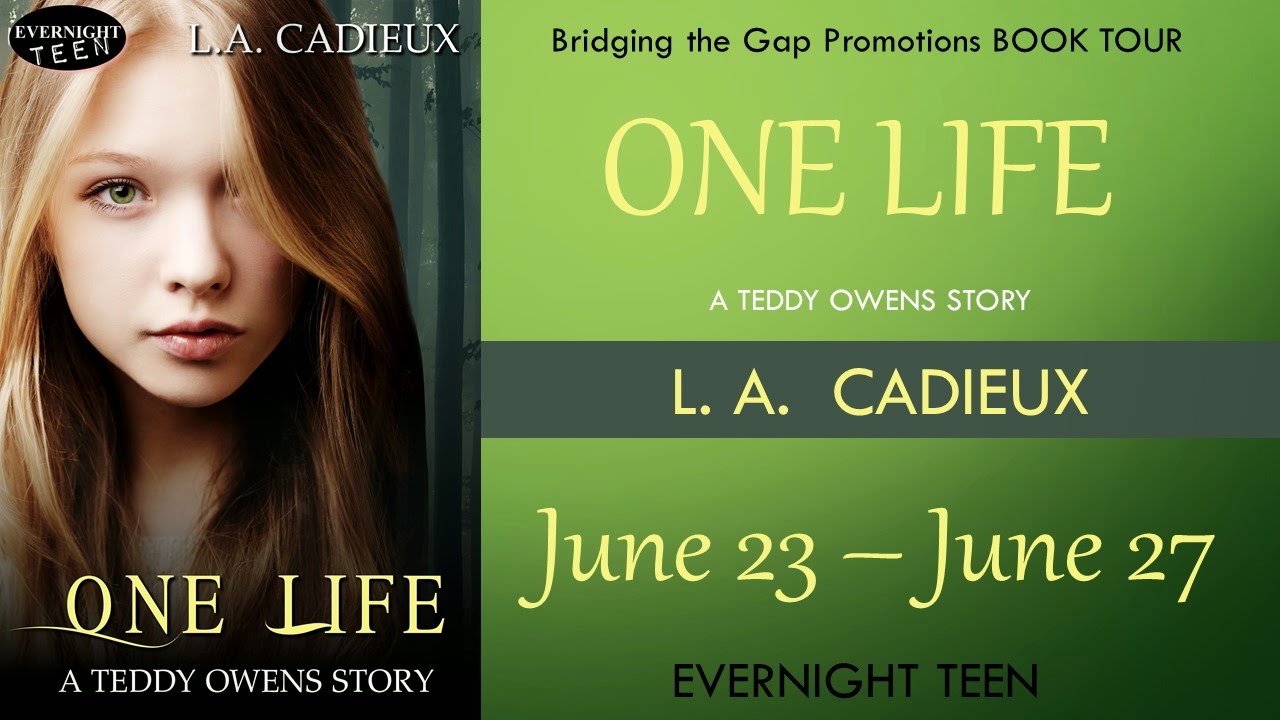 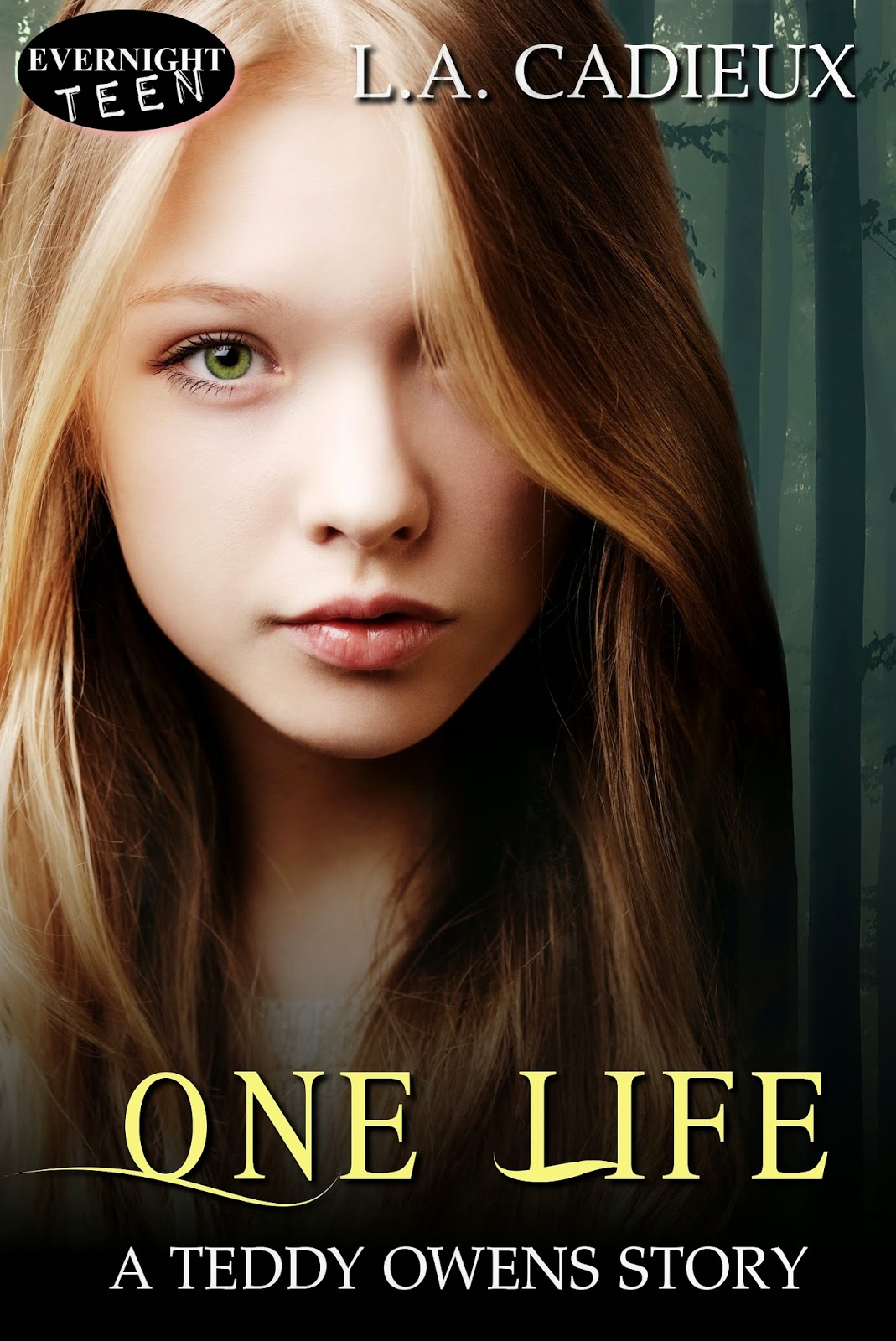 Intent on leaving her troubled childhood in the past, snow-obsessed sixteen year old Teddy Owens has moved from Texas to her uncle’s secluded Rocky Mountain estate—a beautiful place, but colder than she imagined. Curious about her surroundings she ignores the persistent advice of new friends and digs around to uncover the allure of the mysterious estate—only to discover her friends have terrifying secrets of their own. With each new revelation, Teddy is thrust further into a clandestine underworld where she is hunted for her dormant supernatural power…the ability to save just one person from death.
After her family’s sordid history of betrayal is unearthed, Teddy’s world is rocked when she must travel to New York City and take an oath promising her power to an
arrogant heir of the underworld, Leevi Koivu. Can she trust him?
And in the end someone she loves, but cannot save, will die.
Buy Links
Evernight Teen – http://www.evernightteen.com/one-life-by-l-a-cadieux/
Amazon  –  http://www.amazon.com/Life-Teddy-Owens-Story-Book-ebook/dp/B00L4N2PYQ/ref=sr_1_1?s=books&ie=UTF8&qid=1403287368&sr=1-1&keywords=One+Life+by+L.A.+Cadieux
ARe –  https://www.allromanceebooks.com/product-onelife-1555731-140.html
BookStrand  –  http://www.bookstrand.com/one-life
B&N, Smashwords and Print coming soon

“Admit it, you’re a mess.” My words were thick with accusation as I showed her the bottle. The lines separating a mother from her daughter began to blur, the tighter my fist clenched around exhibit #1: the
medication bottle. “I found this in the trash.”
Angelique placed the soda she’d been sipping onto the kitchen counter. “Stop worrying about me. Honey, I’m fine. It was an accident—those merely fell into the garbage earlier,” she said. A bead of condensation rolled down the side of the aluminum can, seeping into a chip in the counter.
“Do you take me for an idiot? The trash isn’t exactly accessible.” I pointed to the cupboard beneath the kitchen sink. As I leaned forward my wet hair hung over my face. I’d gone and dyed my locks red a few
weeks earlier. Fortunately, the color had faded after two washes.
“It’s completely plausible it fell under the sink,” she argued. Angelique turned to search the deserted street outside our tattered screen door—her actions were a clear indication of what I’d suspected all along.
“Please, look at me for one minute, and don’t start with one of your conspiracy theories—seriously—I can’t take another. This full bottle was in the washroom trash. I found it after taking a shower.” A knowing
expression dawned on her face…she’d been caught in another lie. “You haven’t been taking your prescription. Why?”
I shoved a hand into the pocket of my cut-off shorts and pulled out the telephone wiretap.
Angelique’s eyes narrowed in on it. “Teddy, give me the bug,” she demanded, placing a thin hand on my shoulder.
I tore out of her grasp. “In case you missed the memo, this isn’t normal. It’s not okay to spy on me. Angelique, I’m not your naïve little girl anymore.” I held up the listening device. “Your sickness is worse than ever. Your paranoia is out of control—you need help. I’m tired of trying to fix it.”
“I’m fine,” Angelique shrilled. Her hair was matted to her forehead, saturated with the humidity. “You have to trust me. I have my reasons.”
“I want to trust you.” I noted how her cheeks and eyes had sunken in. God, she wasn’t eating again. Her anxiety had worsened significantly since my sixteenth birthday. Lately, she’d watched me like I was going to burst into a man-eating tarantula at any moment. “You make it hard.”
“You can’t possibly understand.” She reached over to tug at my arm, resulting in a tussle over the bug. “Give me that already—it’s not yours,” she ordered.
As I ducked out of the way, she jerked my arm. “Let me go!” I tried to snatch my arm away.
“Please, can you try to keep your voice down?” She released me, only to glance outside in search of her imaginary tormentors.
“Why can’t you try to be a normal mother?” I asked, red-faced.
“It was never in the cards for you, honey.” She pushed a limp strand of brunette hair out of her face.
“You don’t listen, not even to the doctors,” I said sadly. “Try to keep care of yourself.” Taking aim, I flung the bottle against the refrigerator and watched with disdain as it burst open, sending pills spewing across the floor. Many of them disappeared into a filthy crack in the linoleum floor under the counter. “I’m not your babysitter!” Angelique stood rigidly, staring down at the pills. Considering her current state of mental health, and knowing my mother, she was probably asking herself if they could possibly be poisoned.
I opened my mouth, then closed it, and then opened it again. “Forget this—I’m done.” I threw my fists up into the air.
“Teddy,” Angelique shouted as I ran from the house. “Get back here this instant,” she ordered. “It’s dangerous—”
I slammed the squeaking screen door behind me, cutting her off.
If I wasn’t so livid I’d have taken notice of the police car sitting at the end of our street, but it was too late: the cops were stepping out of the car. An officer waved me over. Angelique was going to lose it on them, and it was my fault.
Making my way toward the cops, I started to panic. What should I say?
“Hello there,” the first officer said. “Is everything okay?”
“Yeah, nothing to report.” I stared down at my sneakers, not wanting to meet their cynical gazes.
“What’s your name?” the second asked.
“Teddy Owens, sir.”
“How old are you?” He leaned against his cruiser, tilting his head to the side to consider me.
“Sixteen—at the beginning of August.” I cringed as the screen door on our house banged shut. The officers wore amused expressions as Angelique stomped toward us. They wouldn’t be smiling if they knew what she was capable of.
“It’s going to be one of those nights,” the first officer said under his breath.
It was one of the last times I’d play the role of an innocent spectator. 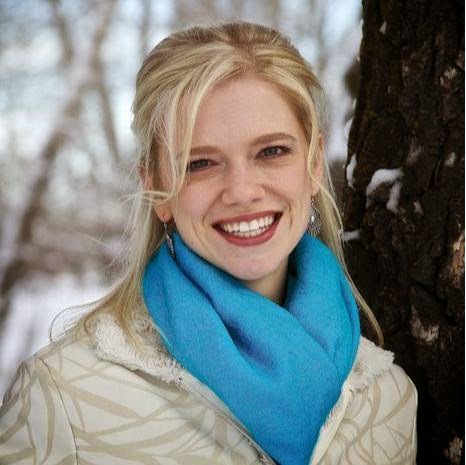 “Our perception of the world is shaped by our experiences and imagery. As a genre fantasy writer it’s my job to create new
possibilities.”
My name is L. A. Cadieux, I’m a YA/New Adult writer and social media-aholic born in Lac La Biche, Alberta, living in Calgary, Canada. Since childhood I’ve been mesmerized by stories of fairy tales, knights, Greek and Roman mythology and comic book heroes. Naturally, I
wanted to create my own worlds/characters and set off on a long quest to write fantasy novels. Creative, yet business minded, I went on to earn a Degree in Management from the University of Alberta Augustana, specializing in Business Economics.
I’m a Project Manager by day and by night I work on my stories. After shelving some of my earlier manuscripts I decided to focus on ONE LIFE, the first in a series of Teddy Owens Stories.
As a proud mom of two – I spend my days and nights multi-tasking.
Random facts: Tim Hortons coffee and ketchup chips are my vices. I’m also a fan of the HBO and CW Networks. My favourite book is Jane Austen’s PRIDE & PREJUDICE.
Website: http://www.lacadieux.com
Blog: http://lacadieux.blogspot.ca
Contact:
Twitter: LACadieux_
Facebook: https://www.facebook.com/AuthorLACadieux
Pinterest: http://www.pinterest.com/lacadieux/
Goodreads: https://www.goodreads.com/user/show/7910457-l-a-cadieux
Google+: https://plus.google.com/101606432963829216880/posts

Giveaway
L.A. Cadieux would like to give away a $25
Amazon Gift Card