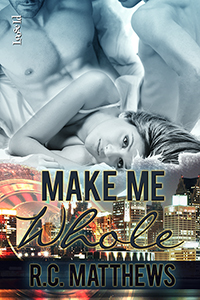 Amazon
Barnes and Noble
Loose ID
For Jake Hanson, it was the perfect solution to a deep darkness. The accident took more than the use of his legs; it took everything that made him feel like a man. He needs their ménage. It puts him on the path to healing. With Jessie and Chad, he can conquer anything…he thinks.Jessica Hanson did it all for her husband, to make him feel whole again. She didn’t want a threesome. At least, that’s what she believed in the beginning. But when she realizes that she can’t imagine life without both her husband and his best friend by her side, she’ll question everything she thought completed her.

FBI agent Chad Wilson couldn’t believe he agreed to his best friend’s proposal. There were too many things beyond his control that could go wrong. But when things go right, he is forced to admit to the best months of his life. Yet on the heels of his greatest joy comes his greatest fear. He’s endangered them all, and the clock is ticking.

They’ll push the boundaries and blur the lines, coming face to face with one of life’s hardest truths: Sometimes to become whole, you have to break.