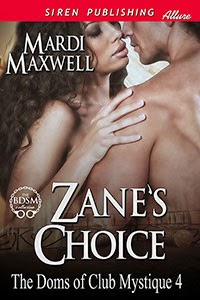 Beautiful, curvy, Ravyn Templeton was raised by a controlling father who forced her to marry a man she detested. Three years ago her husband, Charles Dolman, took her to a BDSM club in Houston to show her how a real woman could satisfy a man. When he chose a sub and began a scene with her, Ravyn refused to watch him and watched another Dom instead. The lesson she learned that night was what a Dom could do for a woman and ever since then the unknown Dom has haunted her dreams. After years of fighting for her freedom, Ravyn has finally managed to escape her abusive marriage only to discover her ex-husband tried to have her killed.

Ravyn is devastated but let’s Zane go to protect him. She’s being blackmailed by Carlos Mendez, and she doesn’t dare tell Zane the truth. After she’s arrested, Fate steps in and brings them together again. Now, only Zane can save her if he loves her enough to fight for her.

I was born in Utah but I’ve traveled throughout America and lived in west Texas and the mountains of Colorado. I wrote my first erotic romance in the summer of 2013. It was accepted and published that same year. Since then I’ve written three more books in the Doms of Club Mystique series. At this time I’m busy writing the fifth and final book in the series. My heroes are tough cowboys with military backgrounds and my heroines are strong, sassy and submissive. I want the reader to fall in love with my characters and feel their pain and their joy so I put a lot of emotions and suspense in my books.
Other than writing, I love to read, travel, garden, swim and hike with my family, as well as go to the local drive-in movie with a carload of friends and a huge container of home-made cheese popcorn.