Series: Books of the Kindling, #2

Books of the Kindling, Book 2

One terrifying premonition brings them together. Another will threaten their future.

Do dreams come true? Dr. Daniel Woodruff hopes they don’t, because his dreams predict a devastating future for him, for those he loves—and for the planet.

His latest premonition, which blows a huge crater in his eroding sanity, holds a singular horror—the loss of a wife and unborn child. Yet another reason he can let no one into his chaotic life, least of all a perky, persistent investigative reporter he finds simultaneously frustrating and fascinating.

Mel Noblett leaves no stone unturned in her one-woman crusade to save the environment. When a whistleblower in Italy proves too frightened to talk, Mel turns to a fall-back lead, an extremely eccentric, beekeeping professor who might just make the trip worthwhile.

Despite their instant attraction, Mel is relieved when Daniel keeps her at arm’s length. After all, she has a secret of her own—one that makes her preternaturally good at her job. And, when Daniel’s terrifying visions prove cannily accurate and begin to revolve around Mel—it is a gift that could put her life in danger.

Warning: Reluctant seer of a bleak future meets petite force of nature who lights up the heart of his darkness. Where there’s smoke, there could be an unpredictable blaze of passion, but the rewards are oh, so sweet…

Mel’s fingers flew as she folded the green origami paper and counted the children in the crowd. She needed two more frogs, in case they were all brave enough to approach Missy Twist for a souvenir.“And at last, the handsome prince deigned to kiss the rather homely-looking frog,” Cornelius Twist pronounced, not quite putting his lips on the very real, and very bored, amphibian in the bottom of the man-size cabinet. He then shut the doors with a dramatic flourish and turned the cabinet all the way around.

“What do you think happened to the frog?” her dad asked the audience.

A number of voices clamored for his attention, most of them children shouting that the frog turned into a beautiful princess of course, but one little girl insisted, rather loudly and as the other voices died down, that it turned into a prince.

Cornelius waggled his eyebrows at the crowd. “Not in this state, my lovely lady!” he quipped, and the adults in the crowd laughed. “No, this frog turned into a beautiful princess.” He swung open the door of the cabinet, and Heather emerged, looking rather like a bedraggled Snow White in her tattered red and gold outfit trimmed with bells and beads.

Perched on her head, which was already adorned with feathers and ribbons, was a rather lopsided and well-worn tiara with a few glass jewels missing.

Heather extended her hand regally, and he bowed to her as he helped her to the stage.

Mel laughed and clapped from her perch next to the stage, widening her eyes in excitement at the children in the crowd and then pointing to herself and nodding proudly, miming placing the tiara on her head as if she could be a princess too. It was all part of the show.

Heather’s outfit had been modeled after Mel’s, only where Mel’s was blue and silver to match her coloring, Heather’s dramatic black hair and pale skin had demanded the red and gold.

Heather hadn’t taken up the stage name that Mel had used—Missy Twist, daughter of Cornelius Twist. Mel’s dad had told Mel with a smirk that the name Heather used instead, Feather Head, suited her perfectly. But she was petite, flexible, coordinated and wonderful with the kids.

A little girl wandered up the aisle to where Mel sat on the steps leading to the stage, and Mel took one of the green origami frogs and hopped it toward her. It landed in the grass at the tot’s feet, and she scooped it up and carried it to her father, who was already en route to retrieve the brave explorer.

As the little girl waved goodbye, Mel hunched her shoulders and wiggled her fingers under her chin in her trademark “Missy” wave and was startled by a sudden emotional surge from somewhere in the audience.

Oh, it was much more than that. Amusement. Relief. Excitement. Pleasure. The zing of arousal, and the first tentative stirrings of love. Someone out there was falling in love right this minute, and once she recovered from the initial rush, Mel let the emotions seep into her. What a wonderful feeling: that first swell of realization, when you look into someone’s eyes and suddenly know.

She looked up and saw a familiar pair of chocolate-brown eyes.

Daniel stood at the rear of the audience, leaning against a support post with his arms folded, watching the show—smiling with that beautiful, warm grin of his.

When he realized she’d spotted him, he held up a gloved hand.

Something tingled through her and curled up in her middle, bubbling happily. He’d followed her. All the way down here.

A warm flush heated her cheeks. Surely that surge of emotion couldn’t have come from him. The audience was packed after all. But he had followed her.

She scooped up her basket of origami frogs and flounced up the stairs, dashing over to Heather, who was still showing off for the kids, and grabbing the tiara off her head. Heather shrieked in dismay as Mel jammed it on her own head, stuck out her tongue, twirled and dashed backstage with Heather trailing feathers in pursuit.

“What’s up?” Heather asked without missing a beat. They had done that routine before, but it had been a while.

“Are you doing ‘Assistant’s Revenge’ for the closing?”

Heather nodded, looking over to where the cabinet for that illusion stood.

“I’m going to join you guys for this one, the way we did it a couple of years ago, remember?” Mel placed a black velvet cape on a hook next to the stage entrance.

“I have a friend in the audience I want to surprise. Can you hand out the frogs and tell Dad…tell him my prince just showed up?”

Heather blinked, then smiled. “Sure, hon. You don’t know how much I appreciate you rushing down here in case I couldn’t make it. I am so sorry for the trouble.”

Mel waved her off. “Actually, I think you did me a favor.” He followed me!

Her dad didn’t seem surprised when she pushed the appliance onto the stage for the final illusion, the ratty tiara still on her head and a mischievous expression on her face. The audience loved it as he went through the long, exaggerated routine of persuading her to stop showing off and climb into the device, then chaining her in and putting her head and arms into a wooden stock.

The story involved how he was locking her, his innocent but rather rebellious daughter, away to keep her safe. She gave him a hard time about the whole thing, pointing out that other fathers didn’t lock up their daughters, especially princesses, to which he responded that other fathers turned their daughters into frogs every night, especially the ones who went about stealing tiaras.

Mel threw on the hooded black velvet cape and sprinted out, then walked sedately among the passersby in the lane to the rear of the audience, so no one would notice her.

“Who did this to me?” her dad yelled, rattling the chains and making the padlocks jump in the stocks.

“Not I, oh wonderful Master Cornelius,” Heather said sweetly, waving the skeleton key in front of her where Master Cornelius couldn’t see it but the audience could. They laughed and snickered in reaction. “I would never lock you up and throw away the key. Even though you have folded me into a tiny box, and stabbed me with swords, and cut me in half, and—” as the list grew longer, Heather began to lose the sweet tone in her voice and sound like an angry harridan, “—stretched me, and twisted me. But maybe I should have.”

Mel stepped behind Daniel and pulled off her cape, tossing it over his shoulder as the laughter died down.

“Hold this for me, please, sir?” she said as he spun around.

“How do you do that?” he asked, laughing.

“Mostly magic,” she whispered, wiggling her fingers under her chin and stepping out from behind him. 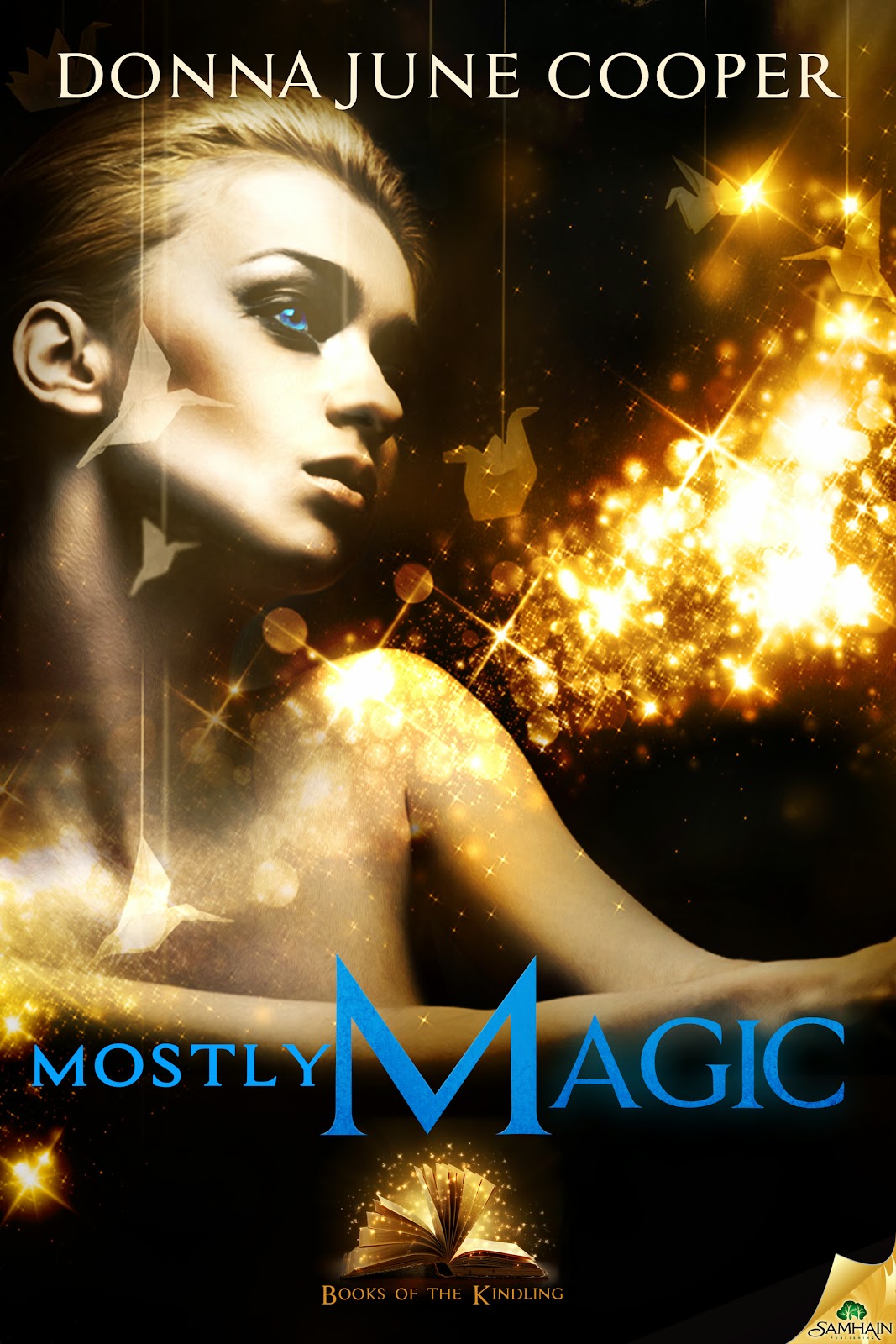 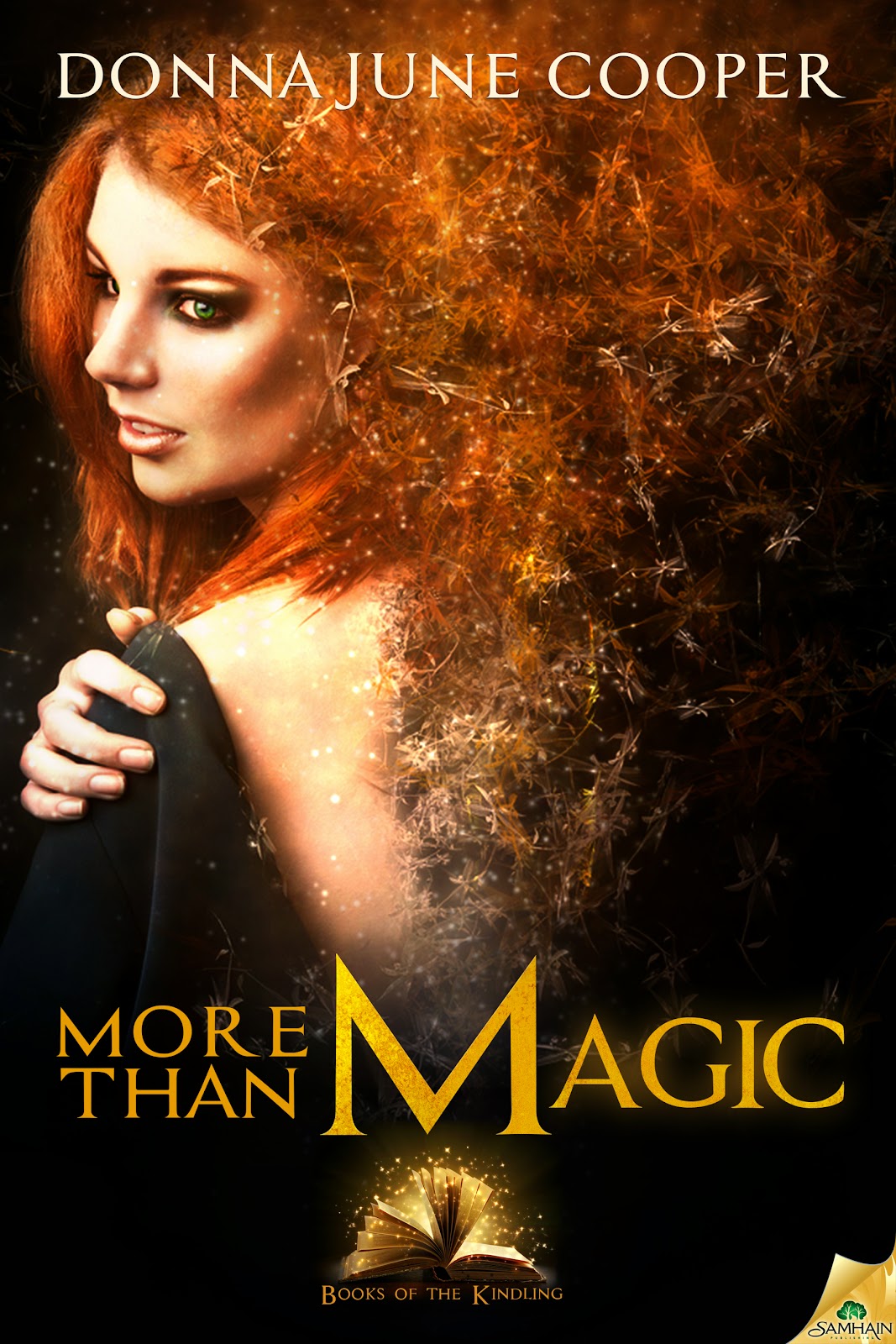 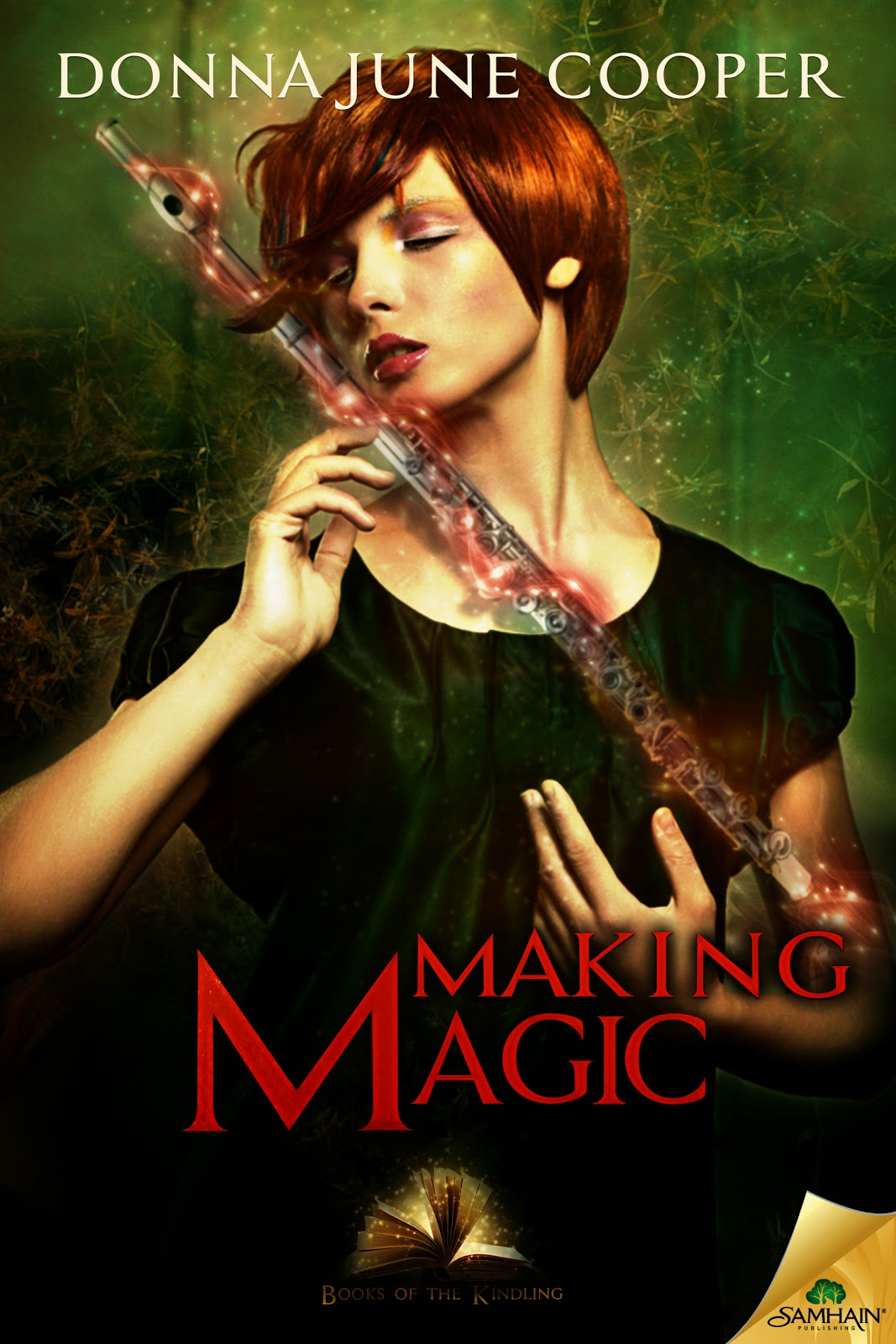 When she’s not being dragged down the sidewalk by her Jack Russell (if you know Jacks, you understand), Donna June Cooper is belly dancing (shiny!), reading (three books at once), writing (of course!) or complaining about the heat (no matter the temperature). A child of the Appalachians who was transplanted to Texas by her Italian husband, Donna returns to her mountain roots as often as possible, and takes her readers with her in her Books of the Kindling.