Suicide is selfish.
It tells the world that you are weak. It tells the world your family and friends have failed. It leaves them with guilt that they could have done more but didn’t. It tells them they are clueless and helpless.
I am weak, but I am not selfish.
My suicide will not leave my family and friends with guilt and shame; it will leave them thankful that they knew me for the short time I was here.
– Cosette Hugo
Her brother died. Her parents divorced. Her high school bully is relentless. Cosette doesn’t have a lot to live for, but it isn’t until she accidentally kills someone that Cosette makes the decision to take her own life.
Unwilling to bring shame to her mom, best friend Mattie, or her boyfriend Chris, Cosette decides the best method of suicide is to become a victim of the local serial killer, The Poser. But every time she goes out to find him she gets attacked; her instincts take over, and she ends up killing her attackers. This quickly leads to unbearable guilt. Desperate to finish this before she gets caught or racks up more victims, Cosette does the unthinkable.
“And when I reach my final goal, to meet my brother in heaven, and we’re looking down at my victim in Hell, he will say to me ‘Well done, Cosette. What a Beautiful Suicide.'”

“No, I just want to apologize.” He loosely holds my hand and walks me to my couch. “I crossed a line I said I wouldn’t and you warned me. You know enough about me to know that I’m no boy scout. But I want you to know that I know enough about you that I think I should stop asking questions.”
I hate what he’s saying to me, but before I get mad at him, he holds up a finger. “I have something for you.”
“Do I want it?”
“Actually, I have two things, and yes, you’ll want one and need the other.” He holds his fist out. I put my hand underneath, waiting to catch whatever he drops. “This I stole, because that’s just what I do, but it doesn’t make it any less meaningful, okay?”
“Okay.” I grin at his cute introduction.
“If you’ve changed your mind about committing to me, then let me know now before I open my hand and look stupid.”
“You saw me completely naked. I think that’s commitment enough.”
“Very true, good answer.” He opens his hand and drops a small ring with two diamonds separated by a deep blue sapphire. “This is a promise ring. It’s not an engagement ring or anything like that. It’s just me pledging myself to you. If you accept me, then accept the ring. If you aren’t sure, then don’t take it. I know it’s old fashioned, but I’m an old fashioned kind of guy.”
“I’ll take it and I’ll take you.” He slides it on my finger while I cry. I lunge at him and kiss him. He smiles and kisses me back.
He’s perfect, just perfect.
I wish I could be like him, so loving, and thoughtful, and kind—but I’m not. I knew when I started that I would not be good for Chris. Shit, I’m on a suicide mission and here he wants to pledge himself to me.
“Chris, I can’t take this.”
“What? Rejection already?”
I pull away from him, feeling the vacuuming black hole sucking onto me, letting me know it’s there waiting for me. “I’m not good enough for you, Chris. I can’t take you down with me.”
“What do you mean down with you? Cosette, I’ll go anywhere with you. You’re perfect for me.”
“The Cozy you know is not the real me. You are pledging yourself to my body, not my soul.”
“I don’t understand. You said you loved me.” His voice cracks, breaking my heart.
“Oh my God, I do! But my soul is dying. It started dying a long time ago and keeps dying the more I cross these lines. It’s not fair for me to offer you something that isn’t perfect. I can’t take this from you. I’m not worthy.” I take the ring off and hand it back to him.
He stares at it, confused. “Did I happen to mention that this was stolen?”
I chuckle through tears. 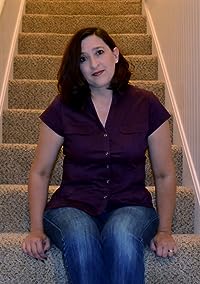 I was born and raised in Colorado Springs, Colorado. Family life was rough with a religious mother and a short-tempered, alcoholic father. (Picture Archie Bunker) My escape was reading and music. I think I was the only kid with my nose in a book during the Air Force Academy football games.
As a teen I was an 80’s new waver with black shaved hair, a pale face and bright red lipstick. I was very self-destructive and always got into trouble. Needing a change I followed my father’s footsteps and joined the Air Force.
During my four year enlistment I was stationed at Nellis AFB in Las Vegas, Nevada where I met my wonderful husband. We both got out of the military and moved to Southern Indiana, on the outskirts of Louisville, Kentucky. I have two teenage boys whom I try to embarrass but have yet to succeed, they have great senses of humor.
I wrote my first novel over ten years ago and was on the verge of having it published when, sadly, my publisher passed away. I shelved my books for a few years to work on our family business. Now I’m back to writing and have decided my fate is in my own hands. And since I hate being told what to do I am self-publishing.

Where to connect with Atty Eve:

Fabulosity Reads Book Promotions is a book touring website that promotes authors and their precious works to an extensive audience using blogs, twitter, Facebook and other Social Media, with the aim of introducing them to an appreciative readership.
They offer a diverse range of both complimentary and affordable products to help the reach of your book go that much further.