Shadows in the Curtain 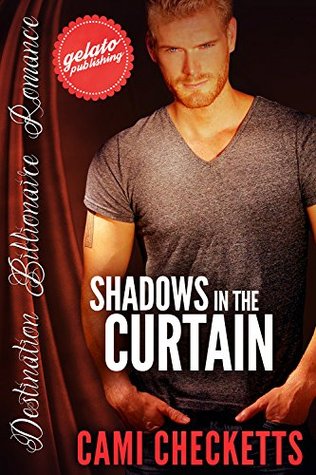 Every stage actress wants fans, but what happens when one goes too far?

Emmy has the perfect life— a house on the beach, a successful career headlining the local theater, more money than she cares to spend, and love. But when a brutal murder brings unimaginable grief, Emmy’s world comes crashing down. As she tries to pick up the pieces, she can’t seem to avoid Josh, the new fireman in town.
Emmy does her best to fight the sizzle in her chest when Josh is near. But with the stalker still out there, terrorizing her and those she cares about, she can’t fall for anyone—especially Josh, a suspect in the murder investigation.
If Emmy allows a man to get close, it’s not just her heart she puts at risk, it’s her life.

“I love a good romantic suspense and Shadows in the Curtain was great–really creepy! I made the mistake of reading it at night while my husband was out of town and I was a little scared. I definitely didn’t want to look out of the window and tripled checked the locks.

Emmy is such a sweet woman. She is very loyal to those she loves and is dedicated to her work. She is a very talented actress, but instead of focusing on fame and fortune, she seeks love and happiness. Emmy really has her priorities in line. I enjoyed the friendship she had with her neighbors, especially Kelton.
Josh is a mystery–is he the stalker/murderer or is he a friend? Sparks really fly between Emmy and the new firefighter, which makes it harder for Emmy to stay away.
I loved the suspense and mystery, because like I said before, it was really creepy. I thought it was well-done in a way to keep the reader engaged and invested in the story. The romance was sizzling, but clean, and for me (a clean romance lover), that kept me flipping the pages. The characters were well written and the mystery kept me guessing. I loved the setting–I love the ocean and would love to have a house in a place like this one (small town Oregon)!” – Katie Watkins, Reviewer, Katie’s Clean Book Collection

One thought on “Shadows in the Curtain Re-Release @camichecketts #gelatopublishing”