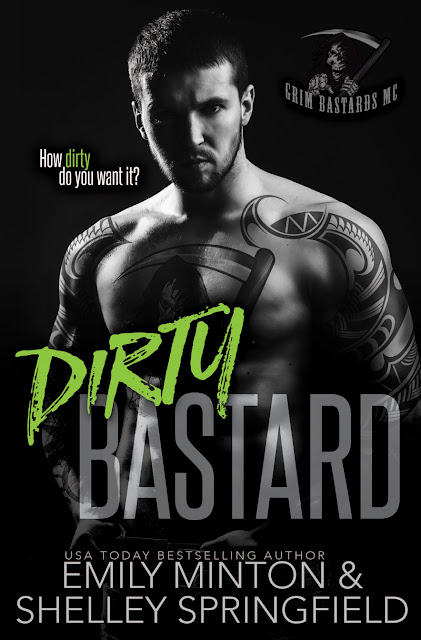 She’s a biker chick with an edge.

Daughter of an MC president, Trix Slade is used to living on the wild side, but nothing prepares her for being kidnapped by the Grim Bastards MC. Hellbent on getting back home, Trix will do anything to get away from her captors–anything. There’s only one problem, Boz is as sexy as he is wild– a tempting combination for a woman like Trix.

He’s a bastard with a soul.

The Bastards’ president, Boz Creed, wants to bring Trix’s father down and knows the best way to get to him is by using his precious daughter. Determined to get the revenge he seeks, Boz is willing to do anything to get what he wants–anything. There’s only one problem, Trix is as sexy as she is stubborn–a deadly combination for a man like Boz.

Can love between two rival clubs survive without someone taking the ultimate fall?

His lips press against mine again in a soul shattering kiss. It’s slow and gentle, soft. This kiss is unlike any we’ve ever shared before; unlike any kiss I’ve ever had in my life. It is pure love coming off both of us, melding us together as one.

Slowly pulling away, he pushes me over onto my back. He makes his way down my body, only stopping to place a kiss on both of my pebbled nipples before pulling my legs apart. His talented mouth covers my core as his tongue slips between my folds and runs over my sensitive clit. He sucks my clit into his mouth, scraping his teething over the sensitive nub. One of his fingers slips into me, gliding in and out at a leisurely pace.

His tongue circles my clit once, then again, before he sucks it into his mouth. He adds another finger, then curves them up to reach my G-spot. The gentle suction, along with his finger rubbing my flesh, pulls an earth shattering orgasm from my body.

Bringing my hands to his dark locks, I moan out his name. “Boz.”

I’m still catching my breath as he makes his way up my body, once again stopping to place a kiss on each of my breasts.  Then his lips are on mine again, for another gentle yet deep kiss. I can taste myself on him. The flavor of the two of us combined is completely intoxicating, causing an aftershock to course through my body.

He pulls away long enough to grab a condom and roll it on, then brings his mouth back to mine. His hardness is nudging at me, asking for entrance.  Instead of sinking in, he runs the head of his cock through my juices before settling back where he belongs.

Lifting my hips just enough for the tip to ease in, I look him in the eyes. “You are amazing.”

His eyes are locked on mine as he enters me inch by inch, slowly sliding deeper. “Never felt anything better, darlin’.”

I lift my hips again, forcing him to move with me. He slowly pulls out of my depths then glides back inside. He pulls out again and again, thrusting back in a bit harder each time. I wrap my legs around his waist, resting them right above his ass, then lock my feet at the ankles. After that, I simply hang on and enjoy the pleasure of him filling me.

“Nothing could be better than this,” I say with a sigh, closing my eyes.

His thrusts gain speed, going a bit deeper each time. His hips rock back and forth, grinding against me each time he bottoms out. When he changes angles, causing his pelvic bone to brush over my clit, the constant friction has me getting closer and closer to coming again. When he finally goes all the way in again, my entire body is on fire as pleasure fills me.

I toss back my head and moan out my love for him. “Only you.”

USA Today Bestselling author, Emily Minton is a Kentucky native. She is proud to call the Bluegrass State home. She claims she bleeds blue–Wildcat Blue! She has been married to her husband, David, for over twenty years. They share two wonderful children.

Emily loves to read and has more books on her kindle than most people could read in a lifetime, but she intends to read every single one. She has published nine books, but there are many more are floating around in her head. She hopes to get them all on paper before long. She loves sharing her dreams with her readers.

Shelley was born and raised in Kentucky and doesn’t see herself leaving the bluegrass state anytime soon. Shelley and her husband have been together for sixteen years, and they share three beautiful daughters and one handsome son.Although Grim Bastards is her first published novel, she has been a fan of romance reads for many, many years. Shelley loves all sorts of genres of romance but Contemporary, New Adult, and Romantic Comedy are her all-time favorites. 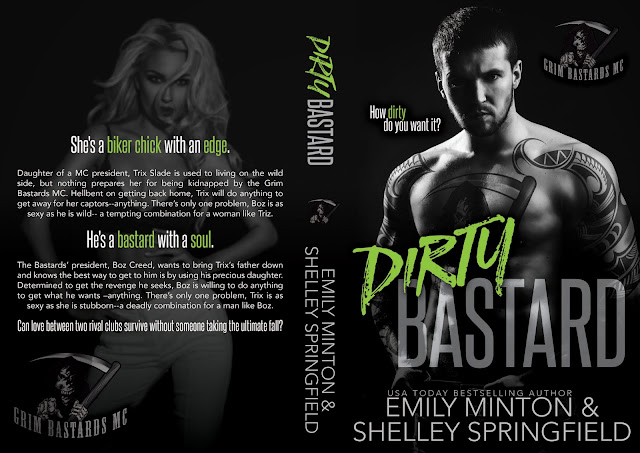