Make your Valentine’s Day tail-wagging and purr-fect with 14 brand-new romances from award-winning and bestselling authors. 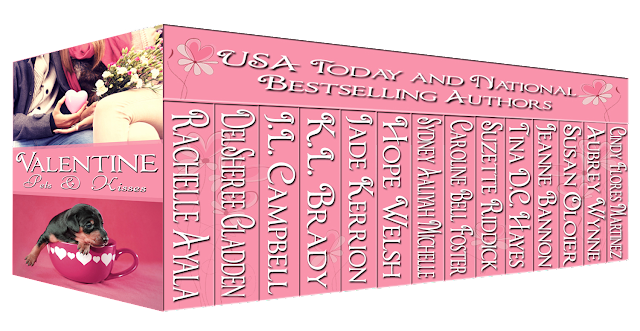 Valentine Hound Dog – Rachelle Ayala
A fashion designer and her basset hound puppy convince a burned ex-firefighter that beauty is never skin deep and neither is love.
The Crazy Girl’s Handbook – DelSheree Gladden
Watching her nephews was supposed to be fun and a relaxing weekend for Greenly, not a never-ending disaster all witnessed by the best blind date she ever stood up.
The Vet’s Valentine Gift – J.L. Campbell
A veterinarian is caught between his job, an ex, a menagerie and love. Can a little Cupid fix things by Valentine’s Day?
Her Perfect Catch – K.L. Brady
Years of faithful dog-sitting pays sweet dividends when a struggling sports writer scores tickets to the Super Bowl and encounters her favorite football player.
Inflamed – Jade Kerrion
A firefighter running from his past convinces a hard-luck single mother to believe in happy endings.

Remember When – Hope Welsh
A couple headed for divorce discovers common ground for joint custody of their Akita.
Your Biggest Fan? – Sydney Aaliyah Michelle
Snowed in with the man of her dreams, a football fan and her dog find love.
The Feline Fix – Caroline Bell Foster
A scientist questions her cat’s loyalty when it comes to love and a hunky policeman.
Trembling Hearts – Suzette Riddick
A daring young woman crashes into the life of a disfigured recluse and his pooch. Can love be far behind?
Valentino, Be Mine – Tina D.C. Hayes
Sparks fly when two people who can’t stand each other wind up dog-sitting a rambunctious little Yorkie that needs a new home.

Lost and Found – Jeanne Bannon
Stuck with her ex’s puppy, a young teacher meets a new man after a series of unfortunate events.
Surviving San Francisco – Susan Oloier
A small town girl survives San Francisco after she hits a cat and falls for a handsome veterinarian.
19 Ivy Lane – Aubrey Wynne
A mysterious woman and her cat befriend a postman and set tongues wagging on Ivy Lane. But when he delivers a long-awaited letter, will his heart be “returned to sender?”
Three Plus Three – Cindy Flores Martinez
A grieving widow and her beloved doggie meet a handsome widower the day before Valentine’s Day.

Rachelle Ayala From romantic suspense to sweet contemporaries, I write from my heart and love to include children and pets in my stories.
DelSheree Gladden is a USA Today bestselling young adult and romance author, whose writing includes everything from dystopian and Native American mythology to sweet and funny romances.
J.L. Campbell is an award-winning author who writes sweet romance, romantic suspense, women’s fiction, new and young adult novels.
K.L. Brady is a multi-award-winning author of sweet and sexy romantic comedies, young adult romance, and a spy thriller series based on her career in U.S. intelligence.
Jade Kerrion writes frequently award-winning, occasionally best-selling science fiction, fantasy, and contemporary romance novels.
Hope Welsh writes romance fiction. Her first love is paranormal. She’s been writing since she was in third grade and has never looked back.
Sydney Aaliyah MIchelle is a contemporary romance writer, a voracious reader and movie fanatic who hails from Texas.
Caroline Bell Foster writes contemporary women’s fiction with themes of substance that defy convention.
Suzette Riddick is a wife, mother and nurse practitioner who enjoys writing romance novels with a touch of reality.
Tina D.C. Hayes writes romantic suspense and cozy mysteries while her pampered pooches and parrots stand guard against writer’s block.
Jeanne Bannon is an international best-selling author of paranormal and romance fiction with twenty-five years of experience in the publishing industry.
Susan Oloier is a mother and educator who writes memoir, as well as adult and young adult contemporary fiction.
Aubrey Wynne is an elementary teacher by trade, champion of children and animals by conscience, and author by night.
Cindy Flores Martinez writes sweet romantic comedy and inspirational romance in both English and Spanish. 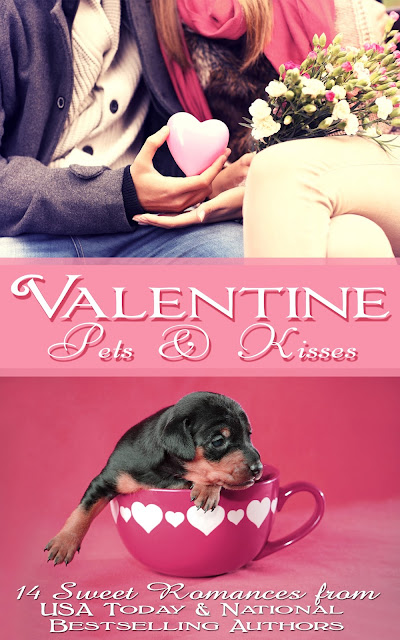 END_OF_DOCUMENT_TOKEN_TO_BE_REPLACED

Been there. Done that.

Feisty and independent, Anya Davies lives by her own rules. The one thing she’s hell-bent on avoiding is a conventional relationship. Nor is she interested in romance, thanks to her abusive ex who refuses to stay in the past. The second complication in her life is a secret that condemns her to constant guilt and a solitary life. A series of near misses and escalating threats are a third and worrying factor. Only a special man would understand or live with Anya’s challenges and demands.

Casual sex…so not having that.

Enter Christophe Mondesir. Two years ago, Anya dumped him without explanation. An accidental meeting shoots Anya back on Christophe’s radar. He refuses to be denied and plans to breach the fortress Anya has built around her heart—if she’ll commit to more than a casual liaison. He’s also determined to find out what she’s hiding. That’s if the stalker who’s after Anya doesn’t end her life first.

He stood before her, pressing kisses to her neck. Then his lips covered hers. Soft. Persuasive.

She resisted him at first, but the memory of his lovemaking warmed her blood and she relaxed against him. The unknown word he’d spoken came to mind and she twisted away from him. “I’m not so sure I should let you touch me, ’specially since I don’t know what you said earlier. What was that anyhow?”

“I said you should stop talking like a slut.”

She mashed his toes with her foot. “How dare you talk to me like that?”

“Ouch! If you insist on treating sex as if it is some sort of pill—”

“If you were sensitive to my needs, I wouldn’t have to resort to asking for sex.”

He narrowed his eyes. “You know what? I’m going to give you what you want.”

That said, Christophe pressed his lips to hers, forcing her mouth open. She fought him, but this time he ignored her attempts to escape.

The intensity of his kiss frightened her. His grip on her arms was too tight and she felt suffocated by his strength. “No, Christophe, I—”

His hand glided under her shirt and the words lodged in her throat. She cast aside her objections, swept away by the fire his touch lit on her insides.

They landed on her bed, struggling to free themselves of their clothing. Minutes later, Christophe reduced her to an orgasmic shudder.

Then they started over.

When they were satisfied, she panted against his chest.

Christophe eased away from her and rolled onto his back to stare into a corner of the room.

Now what was wrong with him? She raised herself up on her elbow. “What’s bugging you now?”

It took him a while to look her in the eyes. “D’you realize I just raped you?”

She almost giggled. “Well, it was the best rape I ever had.”

He murmured something she didn’t hear and rolled onto his side, away from her.

Anya stared at a mole on his shoulder, unable to believe what she was seeing and hearing. Was he serious? Wasn’t she supposed to be the basket case?

She scratched at the skin around the cast. It was itching like hell lately.

Christophe got up and went into the bathroom. The toilet flushed and she waited for him to come back to bed. Instead, he got a pair of jeans from the cupboard and pulled them on, along with a tee-shirt.

Anya gaped at him. “Where the hell d’you think you’re going?”

“What d’you need to think about, Christophe?”

She yanked her shirt on and stood in front of him. “Every time I get mad and tell you to leave, you refuse to go. Now, we don’t even have a serious quarrel and you’re running away. What’s wrong with you?”

He slipped both hands in his pockets and wouldn’t look at her. “I have to go.”

Using her hand, she tipped his head so she could see his eyes.

He was in pain.

She didn’t understand what the problem was, but something had gone terribly wrong. She grabbed his arms and spoke softly to him. “Don’t walk out on me now. I don’t know what’s going on with you, or what you think you did, but I need you.”

“I’m sorry, Anya.” He stepped out of her grasp and walked away.

She sank on the bed, rubbing the frown line on her forehead. Would he be all right? Her heart rate went up and she pressed a hand to her chest. Christophe had left, but she needed to check whether he’d locked up.

The lock was engaged and she was alone in the house. She leaned against the front door, feeling as if she’d bought a bus ticket and the driver had dropped her off miles away from her destination.

Her eyes smarted, but she would not cry. While she was sure Christophe’s withdrawal was directly related to her, she sensed there were other factors at play.

If he didn’t want to talk, how could she get to the root of what was eating him?

J.L. Campbell is a proud Jamaican, who is always on the hunt for story-making material.

Where to find JL Campbell:

Fabulosity Reads Book Promotions is a book touring website that promotes authors and their precious works to an extensive audience using blogs, twitter, Facebook and other Social Media, with the aim of introducing them to an appreciative readership.

They offer a diverse range of both complimentary and affordable products to help the reach of your book go that much further.