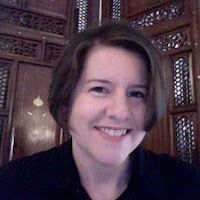 What inspired you to write your first book?

As a freelance writer back in 2008, I wrote a travel guide to Ocean City, Maryland for the Tourist Town series (Ocean City: A Guide to Maryland’s Seaside Resort). While I was researching that book, I wanted to read some good mysteries set in the region—and I found that there aren’t very many. Ocean City is a gold mine of funny characters and kitschy, fun scenery, and it holds plenty of memories from my own life. I was surprised that the OC-inspired fiction choices were so thin, so I decided to chime in with my own series.

Have you ever disliked something you wrote?

I dislike everything I write, the first time around! I have done a lot of work as a professional editor, and it’s very difficult for me to just shut up and write, you know? My first drafts are always a mess, and I hate them. But I’m finally getting into the rhythm of it and learning to get out of my own way and just get the draft done. Then I edit, edit, and edit again. In terms of disliking any finished pieces? I’m pretty happy with my creative writing. I try not to get my ego too caught up in any of it, though. I write campy genre fiction, with glee! I love it that readers enjoy my stuff, but when I get a cranky Amazon review, it doesn’t cause much existential angst.

How has your writing career changed in the past year?

My writing career just changed in the last month, because I have taken a full-time job. I’m coordinating logistics for the expatriate school in my community, which definitely scratches my organizational itch. I’m really happy about this change. And yet…. I haven’t had to report to work wearing real clothes and makeup in almost ten years. No more days of working in my pajamas on the couch with only my cat Eddie for company. I am still adjusting to the time crunch, trying to figure out put in a full day’s work and still eat healthy, exercise and get enough sleep–plus finish the third novel. Good Lord! Other people do this, I keep telling myself. And it is getting better: I’m getting more efficient, and I have every intention of finishing the next book in my series.

What are you reading now or what do you have in your TBR pile?

Next up is Bad Citizen Corporation, the debut crime novel of fellow UCSB grad S.W. Lauden. It came out last month with some wildly enthusiastic reviews, so I’m pretty excited to read it—and not just because we cut our teeth at the same college newspaper. Lauden is a big supporter of indie fiction, interviewing fellow authors and organizing readings and events in Southern California. We need somebody like Lauden on the East Coast—or maybe we have one, but I haven’t been invited to the party yet. Living in Saudi Arabia but writing about Ocean City, Maryland does leave me rather disconnected with what’s going on with my community of authors.

What are you working on now?

I’m well into Ocean City Getaway, the third in the Jamie August series. In this installment, Jamie faces such daunting challenges as infiltrating a ring of con artists working the eastern seaboard; fighting against her vegetarian boyfriend’s campaign to make her stop eating crabcakes (this may involve a breakup); and smiling through her best friend’s beach wedding while wearing an off-the-shoulder lavender bridesmaid’s dress. 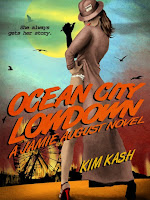 Ocean City Lowdown introduces Eastern Shore Maryland reporter Jamie August, who has a talent for unearthing more than her editor wants and a weakness for Ravens jerseys and sparkly underwear. She is assigned to cover the grand opening of a big new housing development in Ocean City, Maryland. But instead of writing about wrap-around porches and rattan furnishings, she uncovers kickbacks and payoffs, blackmail and murder. Jamie’s tenacity, smarts, and sheer recklessness—plus some smokin’ striptease dance moves—can get her out of some tight spots, but are they enough to save her from a psychopathic arsonist and two generations of corrupt real estate tycoons?

Add to Goodreads ~ Buy at Amazon 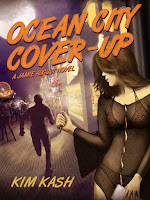 Euro-trash collides with American gangsta in Maryland’s gleefully cheesy beach resort. Reporter Jamie August befriends a spoiled heiress who is being pursued by Russian mobsters—and a chart-topping rap star. Meanwhile, a raging crime spree is keeping Jamie busy—and so is a hot new boyfriend and a strict jogging and frozen custard fitness plan. Action careens from OC to Dubai, from the wild shores of Assateague to a wild-west campground. Will Jamie survive to debut her fringed leopard-print bikini?

Add to Goodreads ~ Buy at Amazon