What would happen if time, the fragile thread that both leads and binds us, could be unwound as simply as untying a knot? Would we go back, charging through our own history, changing and tweaking, plucking at that fragile thread until time itself unraveled all around us? Would we create countless universes through which we could live our fantasies—or would we become our own nightmares? Would we blaze ahead, reckless and wild, into our own futures? Would we become our own heroes, or would we become villains?
Join us for a series of stories that explore time, through the eyes of those bold enough to conquer it, and foolish enough to try to control it. From the award-winning team of authors at Clean Teen Publishing, Twists in Time will both entertain and challenge the way you see the world around you. Because when one finds a way to break the barrier of time, endless worlds of possibilities emerge. 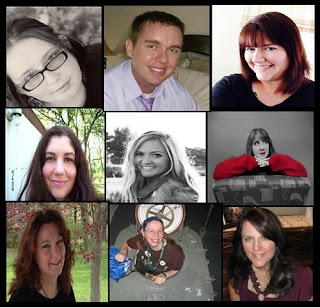 “After Time” by Sandy Goldsworthy
“The Fall” by Holly Kelly
“The Kiss of Time” by Amanda Strong
“With a Grain of Sand” by Kathy-Lynn Cross
“The Before Sky” by Sherry D. Ficklin
“What You Wish For” by Kelly Risser
“Tides of Time” by Julie Wetzel
“It’s The Little Things” by Jon Messenger
“Romeo and Juliet Times Infinity” by Kasi Blake

There is a tour wide giveaway. Prizes include the following:
Giveaway is International.

After losing her father, Emma Bennett moves to her aunt’s small town of Westport to finish out her senior year of high school. Emma wants to forget the pain and loss of the past few weeks, finding relief in the company of Ben Parker—a local boy who she has an instant attraction and uncanny connection with. When Ben seems a little too preoccupied with other responsibilities and has no time for her, Emma turns to the town’s hottest flirt—Lucas Crandon—for affection. Unfortunately, she realizes a little too late that, sometimes, bad boys really can be bad for you.

Life as an undercover agent for the Afterworld’s Bureau of Investigation isn’t an easy job. When Ben Parker finds his soul mate, Emma, in a small town, he finds himself forced to choose between doing his job or rekindling a relationship with the love of his existence. After Ben is notified that a notorious immortal is loose somewhere near Westport, he realizes that his love life will just have to wait. There is a criminal to apprehend before he can have his girl.

When lives are at stake and immortals are on the loose, can two soul mates find their happy ever after?

In all the years I spent undercover, I was never a high school student.

Hey, you structured this cover. Molly’s voice rang in my head, as I followed the flow of annoying adolescents in the hallways of Westport High. You could have waited to meet Emma when she was in college, or working her first job. Instead, you decided seventeen was the right age to introduce yourself.

It wasn’t her age. I timed it in the aftermath of her dad’s transition, I responded in defense. I took a seat near the window in calculus. It was my first period of the first day of school.

Yes, yes, whatever! You dragged me along into this assignment, she muttered. And I’m not any happier than you are, sitting through the secondary education system.

You volunteered, I rebutted. Remember? ‘I could use a bit of down time, Commander’. I mimicked her meeting with our leader when I came up with the idea several years earlier.

Molly sighed in defeat. I acknowledged Drew Davis. He took the seat behind me. Mr. Vieth called us to attention. Molly was greeted by her Spanish teacher in another classroom.

Jorgenson knew better. As our handler, he was privy to every thought, comment, action, even feeling, our human disguises encountered on earth. It was part of our contract, succumbing to the tether, the bond between our world and an agent on assignment. It was an invisible leash that allowed him to keep tabs on our whereabouts at all times.

Right. And you were Mother Theresa in your last life, too, Jorgenson joked.

Ever since the pioneer field agent Victor Nicklas went rogue over a century ago, the tether was required. It didn’t bother me.

Good luck in your senior year of high school. Jorgenson’s chuckle echoed in my mind as Vieth called my name. I raised my hand, acknowledging my attendance.

And, stay out of trouble this time, Jorgenson curtly added. I don’t particularly like explaining your stupidity to the commander. It makes me look bad.

Sandy Goldsworthy was born and raised in a small Wisconsin town. Her passion for writing began when her high school English teacher inspired her to be more descriptive in her work. Today, Sandy is writing the second book of Emma and Ben’s story. When she’s not writing, Sandy enjoys spending time with her husband, Mike, and two children, Brittany and Kyle, or playing with her English Mastiff, Miles.