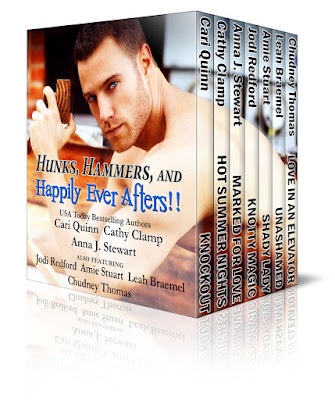 Get down and dirty with this sexy blue collar bundle featuring seven original contemporary romance novellas that range from sweet to sizzling.

KNOCKOUT – Cari Quinn
All Emerson Knapp wants…is everything he shouldn’t have. When all his secrets come to a head, the only question left is how much he’s willing to lose.

HOT SUMMER NIGHTS – Cathy Clamp
Sophie Green is smart, gorgeous, and good with her hands. Can Gabe convince her to make her stay at the Starlight Motel a permanent one?

MARKED FOR LOVE – Anna J. Stewart
Overworked pub manager Regan Murphy is about to have her hands full with Lantano Valley newcomer and tattoo artist Brodie Crawford: a sexy single father who is far too distracting.
*this version of MARKED FOR LOVE is a spiced up version of the original sweet novella of the same title. Includes a never before published epilogue, available ONLY in this boxed set.

KNOTTY MAGIC – Jodi Redford
Hormones be damned, Tully Eastwood won’t succumb to her attraction for a sexy lumberjack—until she finds herself trapped overnight with him in the woods.

SHADY LADY – Amie Stuart
Free spirited, sexually adventurous Cherise Sinclare doesn’t need a forever kind of guy. . . until she finds one willing to fight for her.

LOVE IN AN ELEVATOR – Chudney Thomas
Mica Lawson is a failure and a flake; at least according to her family. Then one stalled elevator, and a sexy repairman, change her life. 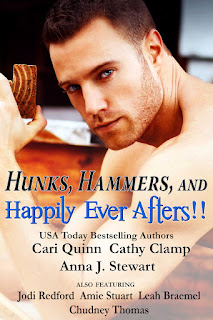 Cari Quinn
USA TODAY bestselling author Cari Quinn wrote her first story–a bible parable–in 2nd grade, much to the delight of the nuns at her Catholic school. Once she saw the warm reception that first tale garnered, she was hooked. She attempted her first romance in junior high, long before she’d ever read one. Writing what she knew always took a backseat to what she wanted to know, and that still holds true today.

Though she also fires up her computer as a graphic designer, proofreader and editor, she can’t resist the lure of disappearing into a world of her own creation. Now she gets to pen sexy romances for a living and routinely counts her lucky stars.

The only thing she loves more than writing is hearing from readers! Please contact her through one of the ways below.

Cathy was awarded the Career Achievement Award for Paranormal Romance in May, 2008 from RT Bookreviews Magazine. Cathy also shared the win for several co-authored books with C.T. Adams of the Book Buyer’s Best Award, the RT Bookreviews Reviewer’s Choice Award, the Reviewers International Award of Excellence, the Texas Gold Romance Award, the Write Touch Readers Award, and several others. It’s gratifying and humbling to win awards for books that you put your heart into, and I hope you enjoy them as much as other readers have!

Cathy has also written several stand-alone novels, not in series, including my very first novel, The Road To Riches, an historical fiction about a railroad race in Colorado’s Silver Boom period, and Magic’s Design, the first urban fantasy published as Cat Adams.

Cathy also writes short stories, which is a whole different kind of writing.. I like writing in a lot of different genres, and it’s in short stories where I let my wings spread. I have published short stories in horror, science fiction, mystery, literary, Young Adult, romance, thriller, fantasy and western.

When not writing or working the day job, she enjoys gardening and way too many reality television shows.

I’m Amie Stuart and I write sexy, contemporary romances, including AGAINST THE WALL, which is my story in the HHHEA Box set.

For those who don’t know me, I’m a native Texan and I’ve been writing for over ten years. I’m a storyteller even when I’m distracted by two twenty-something sons, too many pets, or a demanding dayjob as a personal assistant.

Leah Braemel
Leah Braemel is the only woman in a houseful of males that includes her college-sweetheart husband, two grown sons, a Shih Tzu named Seamus who behaves like a cat and Turtle the cat who thinks he’s a dog.

She writes sexy contemporary romances (though she does have one historical western) – most of them on the super-spicy side. So if you like bodyguards, cowboys, firefighters, and now blue collar workers, she has a book for you.

Chudney Thomas
I was born in Brooklyn New York, raised on the island of Saint Vincent and the Grenadines. According to my father, I learned to read at three and wouldn’t allow him to skip a page of a story. I grew up raiding my mother’s stash of books and my Aunt Patsy’s extensive library. There, I developed my love of literature, and specifically romance.

Books transported me to different worlds, and encouraged me to learn about different cultures, continents, expanding my horizons. I currently live in Central Florida with my family and our interesting pet pooch Maya.