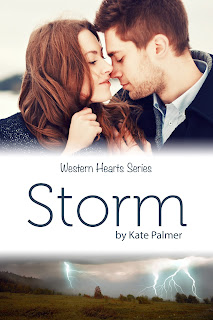 Kate Palmer believes in wholesome entertainment. Her books explore characters undergoing tough situations without compromising standards or becoming bitter. She likes the rush of emotions romantic suspense creates and strives to keep it clean. Her love of farm and ranch life shines through her Women of the West Series. 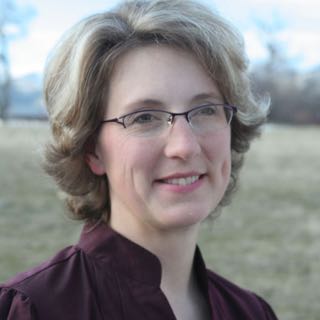 Connect with the Author here:
http://www.katrinapalmer.com
https://twitter.com/KatePalmer40
https://www.facebook.com/KatePalmerAuthor
http://www.amazon.com/Kate-Palmer/e/B0095BOV78/ref=dp_byline_cont_ebooks_1
Here are some fun author interview questions!
What other hobbies do you enjoy when you are not writing?
I love running and working in my yard and garden and baking.

I like to play instrumental music while I’m writing. It helps me keep my pace up. There is usually a theme song for each book that I listen to when I’m not writing. It helps me remember the feeling of the book I’m working on at the time. For Storm, it’s Wild Montana Skies by John Denver.

Time for a Snippet!

Boots cleared his throat. “Missing one or two steers in the round up is one thing. Even three or four, but eleven? You’ve worked this ranch long enough to know . . .” Boots let his voice trail off.

“He’s always poking his nose around here wanting to know just how everything is going.”

“Or how a particular red-head is doing anyway.”

I rolled my eyes. “If he were interested, he would have made some changes years ago when we were both a lot younger.”

“Maybe he tried. You’ve never been the easiest person to get close to.” Boots’ eyes twinkled mischievously.

“A man wants to be needed, trusted.”

“Then he should do something worthy of being trusted, not try and steal my ranch hand’s hours every week. Can you get the water going to the corral? Daylight’s burning while we talk about things we can’t change.” I turned Mystic toward the open pasture.

Jump over to the Official Event Page to see all the bloggers participating in this event and follow along.

This post is part of the Cover Reveal Blog Tour for the first four books in Lashell Collin’s Kelly Family Series. These four novellas will all be released on April 30, followed exactly one month later on May 30 by a full length novel in the series. Lashell will be awarding a $15 Amazon gift card to a randomly drawn commenter during the tour. The other stops on the tour can be seen by clicking the tour banner.

Officer Ethan Kelly is a nice guy. That’s what all the girls say, right before they toss him aside for one of those bad boys. But when he meets rookie officer, Heather Moss, Ethan is determined to show her that a nice guy knows how to treat a real woman.

But Heather isn’t interested. Or at least, she doesn’t want to be. She swore off men a long time ago, and focusing on her career leaves zero room for romance. Even with someone as sweet and sexy as Ethan. But when she saves his life on a robbery call, Heather realizes that he might just be the man to save her from herself.

Bad boy cop Storm Kelly is on the prowl for some action. And the way he’s feeling, he doesn’t much care if it comes in the form of a bar fight or a smart, sassy woman. So when he gets off his Harley and walks into a biker bar, he’s in his element when he finds both … barroom brawl, check. Rescue the damsel in distress, check. And with any luck, that sexy damsel might just turn out to be the perfect sub he’s been searching for.

Nina Fitz is in a world of trouble when the sexy stranger comes to her rescue. Never one to resist a hot guy on a motorcycle, she quickly decides to invite this one home. And when the jerk from the bar decides he’s not through with her, Officer Storm Kelly becomes her protector. But after one night of passion with Storm, Nina is left wondering if she can handle his dark dominant side.

Frankie Kelly has fought her whole life to prove that she is just as capable as all the men in her testosterone-driven family. And now her hard work and dedication to the police K-9 program is finally beginning to pay off. But when her secret, sexy romance with her sergeant culminates in a marriage proposal, Frankie is thrown for a loop wondering if she’s ready to go public with their clandestine relationship.

John Myles is sure of two things in life – one, that he is dedicated to the K-9 program he leads at the police department. And two, that he loves Frankie Kelly more than life itself. But when she hesitates to accept his proposal, John is rattled. Especially when the job gets in the way, forcing him to send her and her K-9 partner out into the dark night in search of a dangerous murder suspect.

Marina Kelly is sick to death of cops! That’s all she’s known her entire life – her father is a cop, her uncle was a cop. All of her cousins are cops. Even her two brothers and her big sister … all cops. So Marina decided early on that her life would take a much different path, getting as far away from that lifestyle as she could get. And dating a cop is totally out of the question!

Levi Hawks is well aware of Marina’s ‘no cops’ dating rule, so when a supposed chance meeting brings him face-to-face with the sexy shop owner, Levi is determined to hide the fact that he’s a police detective from her for as long as he possibly can. Or at least until he can get her to agree to go out with him!

Lashell Collins spent the last twenty years of her life working in Veterinary Hospitals and Garden Centers. But whether she was surrounded by the adorable puppies and kittens she helped care for, or by the beautiful flowers, trees and shrubs, she constantly pursued her favorite pastime – reading romance novels and imagining herself as the heroine in each and every one of them. She began writing as a way to work through her grief after the loss of a few people who were special to her, and she found it to be cathartic, so she kept at it. She self-published her first novel in 2013. Since then, Lashell has self-published ten titles across two series – the Pierced Trilogy (romantic suspense), and the Jagged Ivory Series (contemporary romance) – and is hard at work on another seven titles for this year. All of Lashell’s stories are full of heart and romance, with smart dialogue and spicy sex scenes.

When she’s not writing, Lashell enjoys reading, shopping, eating Chinese food, and riding on the back of her husband’s Harley-Davidson. She loves watching General Hospital and Grimm. She is a huge music fan and is completely obsessed with Slash. Lashell is a member of the Romance Writers of America. Drop her a line; she loves to hear from readers.

All of the books are available for prepurchase at Barnes and Noble: