Nichole Giles, author of the Descendant trilogy, and the Water So Deep series, has lived in Nevada, Arizona, Utah, and Texas.

She is a fan of all things paranormal and magical, and her dreams include raising a garden full of fairies, riding a unicorn, and taming the pet dragon she adopted at a local Convention.

She loves to spend time with her grown children and two grand-babies, travel to tropical and exotic destinations, drive with her convertible top down—even when it rains—and play music at full volume so she can sing along.

Caspian is looking for his mother. Snatched from the beach as a child and raised as a half-breed Mer-Prince in the long-lost city of Atlantis, his turn to rule is coming fast. Caspian learns that the Mer in Oceania have found a method to visit land—a practice forbidden in Atlantis—and later return to the sea. Unfortunately, the “magic” method involves poison so potent that only half-breeds with undamaged lungs can survive it. When his Sea King father forces Caspian’s engagement to a mermaid he can’t stand, Caspian decides it’s time to go in search of his human roots, and the woman who gave him life.

Elise has nothing left to lose, except the house she grew up in and a beat-up classic car her father had intended to restore. While her friends leave home for college and abroad, she’s stuck waitressing at The Sea Turtle, begging for enough hours to pay her power bill, and using her lunch breaks to place flowers on her parents’ graves. Not only is she not looking for love—she’s not even looking for friendship. Loss is something she knows too much of, and she can’t survive any more. But when she finds a mysterious stranger wandering the cemetery, she takes pity on the pathetic soul and brings him to her work where she can feed him a solid meal.

The innocent meeting turns into an unbreakable bond, and sets off a chain of events that leaves them both questioning their place in the world—be it land or sea—and discovering just how essential love and family can be.

1.I am the oldest of eleven children: two biological sisters, four biological brothers, and four step-brothers.
2.I don’t like to read books that don’t involve some kind of romance, kissing scenes included.
3.I must have lived during the regency period in a past life, because I love corset-style dresses and costumes. For Halloween, I’ll probably dress up, even though my kids won’t.
4.My favorite food in the world is steamed snow crab. Even better if it’s Cajun spiced!
5.Whenever I struggle with creating or writing, I like to go for a drive with my convertible top down. I’ve even been known to do this with snow flurries in the air.
6.Nichole’s ultimate dream house: on a white-sand beach, with lots of windows, palm trees in the yard, a huge patio, and within walking distance to a number of friends’ homes. Also near great shopping. It should also have a dedicated library where I can write.
7.I have a growing collection of fairies and mermaids. Statues, paintings, miniatures, etc. I love to be surrounded by fantastical creatures.
8.When I was in high school in Arizona, my friends and I haunted a local hangout, where I became highly proficient at playing, and winning, air hockey.
9.During my junior year, I had the opportunity to go to New York with my choir, where we sang in Carnegie Hall. We also toured the city, largely without supervision. #shenanigans
10.I have kissed a stingray, petted a shark, high-fived a sea otter, and hugged a dolphin, and spied seahorses and lobsters in the wild, but I have never wrestled an alligator or tried to housebreak a lion—and I don’t think I ever will.
Thanks for hanging out with me for ten random facts. You can learn more about me and my books at www.nicholegiles.blogspot.com 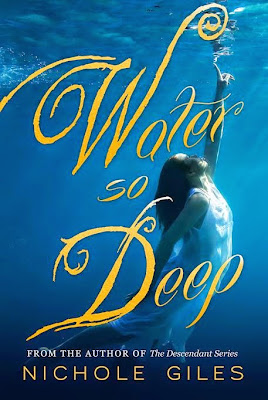 No one knows what’s happening to her, and she’d like to keep her evolution from human to mermaid a secret, but the truth is getting harder and harder to hide. From her adoptive family, from her friends, and especially from the irresistible James Phelps.

Her time in the ocean is spent dodging a possessive merman, while her time on land is split between caring for her special-needs brother and squeezing in every last possible moment of human life. She soon realizes falling for James is unavoidable when he constantly comes to Emma’s rescue and somehow manages to see through her carefully constructed icy facade to the vulnerability she lives with every day. Everything about James makes Emma yearn for a life on land she just can’t have.

When Emma’s brother disappears on her watch, James is the only person she trusts to help her save him. But even if they can save her brother, nothing can prevent her return to the sea. Whether she likes it or not, Emma is changing—unable to breathe without yielding to the tide—and it’s only a matter of time before she’s forced to surrender forever. 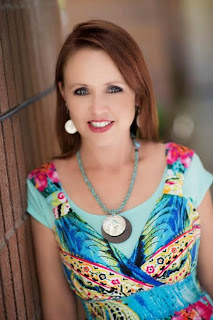 Nichole Giles, the author of the Descendant trilogy, has lived in Nevada, Arizona, Utah, and Texas. She loves to spend time with her husband and four children, travel to tropical and exotic destinations, drive in the rain with the convertible top down, and play music at full volume so she can sing along.

With a sigh that sent a stream of bubbles trailing behind her, Emma put on a burst of speed that brought her back to the cove she considered her own. She swam the length of the inlet once, twice, then returned at a leisurely pace. After taking time to ensure she’d been in the water long enough to keep her going for several days, she hoisted herself out on scaly, but nimble, feet and stole into the privacy of the cave, scratching her itchy hips and legs.
“You cannot avoid your fate.”
Emma jumped, swallowing a curse, and turned her back on Merrick, who had apparently been waiting in her cave. Why did he always come out of nowhere? “I can try.”
“Why will you not swim with me?”
If she believed him capable of feeling, she would think he sounded hurt. “I prefer to swim alone.” As her towel soaked the drops of salt water from her legs, the itching eased, and her white skin smoothed. Once she’d finished drying her body, Emma squeezed the water from her hair and wrapped the towel around her head, then turned back to Merrick, leveling her gaze on his face to avoid seeing the parts of him she preferred not to see. “What do you want?”
“You have ten moon cycles left.”
Her neck stiffened. She hardly needed the reminder. “I think it’s eleven, actually.”
“We will be tied soon after your arrival.”
He ran his fingers along her shoulder, over her birthmark, until he touched her necklace.
Her hands stilled in the process of unfolding her jeans. She stepped away and yanked the pants on over her swimsuit, then pulled on her tank top and slid her feet into her sandals. If he didn’t represent everything she hated about her future, she might at least try to appreciate his friendship or the way his boyish white-blonde hair belied the manly muscles that bulged along his shoulders. But right now, that was too much to consider. “You’re too old for me, Merrick.”
“You will be happier if you accept your fate.” Heat radiated off him as he moved in behind her, his breath hot on the back of her neck as he forced her into the corner. “Accept me.”
She whirled around, hands clenched into fists, and shoved against his chest. “Go away, Merrick. Leave me alone. I hate you. I hate you all for giving me a family and then taking it away.”
“Emmalina. I am your family now. In time, you will learn to love the sea. Your ties to land will no longer be a burden—you will forget.”
“I’ll never forget. Ever.”