The Heartless by James Ticknor 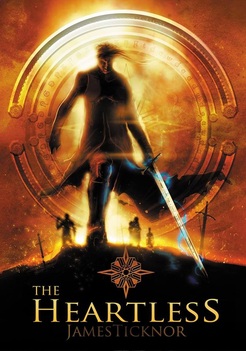 Eighteen-year-old Menar Redfield, a gifted Healer apprentice, plans to settle in the city of Cajoi with his pregnant fiancée. However, his unexplained visions show him a secret war masked by the king’s political regime, placing them both in danger. When his visions come true, his fiancée is killed in the attack on Cajoi by the Heartless, a malicious raider cult.
In his body-strewn path of vengeance, Menar intercepts intelligence revealing the location of Crual, the Heartless’ sadistic combat commander and the one responsible for the death of his fiancée and unborn child. Menar vows to slaughter Crual and sabotage the Heartless’ insurrection. Yet the more blood he spills, the more a dark power grows within him.
If he can use this power to overcome Crual, end the war, and disband the Heartless, their increasing control over the debilitated country will be stopped. But he must hurry, because the dark power Menar possesses threatens to consume him.