Touched to the Depths 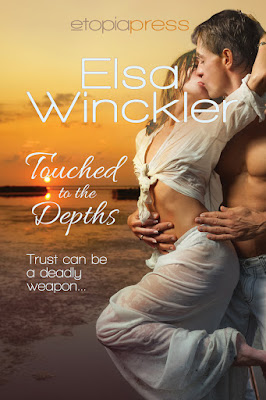 He was the photographer, she the model and on a sunny beach on Mahé, she stole his heart. But Darryn isn’t ready for the powerful feelings Hannah elicits, so when another photographer implies he’s also slept with Hannah, Darryn uses it as the perfect excuse to walk away.

But when they meet again, he can’t ignore his instincts—Hannah is in danger. Lies and threats make targets of them both, and faced with a situation of pure terror, Darryn is forced to realize he’ll do anything to protect her. And to keep her with him, always…

Grab your copy of the book today!

So where are all the Cavallos now?” His laugh was high, near hysterical. Stephen yanked her against his body with his one arm. “You’re all alone. Not even Darryn Cavallo is in sight!”

The guy probably hadn’t had a shower in days, and he also had too much to drink; the stench wafting from him, was overwhelming. She swallowed against the nausea that rose in her throat, but she kept still.

“No, it’s only you and me, Stephen. Isn’t that what you’ve always wanted?” she said sweetly.

His arm stilled around her body. “That’s right,” he said. “You and me, I like the sound of that.” And again his high-pitched laughter followed.

They reached the car. She would have one chance. That was it.

Stephen’s one arm dropped from her body as he fiddled in his pocket, probably looking for his car keys.

“Stand still!” he ordered, yanking her back again. He unlocked the passenger door of the car.

“I only want to take my shoes off, they’re hurting me. Surely you won’t mind that?” Hannah asked meekly and moved so she leaned against the car.

She bent forward and took off one shoe. “Put away the gun. I’m here, and I’m not going anywhere,” she said, not looking at him.

Slowly, she bent down to take off the other shoe while looking at Stephen from the corner of her eye. He played with the gun for a few seconds, but then put it in his pocket.

“Just don’t try anything,” he said and turned slightly to scan the area.

This would be her only chance. Hannah grabbed her shoe and clutched it tightly in both her hands. Stephen moved his feet so his back was turned in her direction. This was it. With all the built-up anger inside of her, she brought down the sharp heel, aiming it straight at the back of his head.

One thought on “Touched to the Depths Book Blitz @elsawinckler”