Lure of the Vampire:

Blurb: What is Lure of the Vampire? 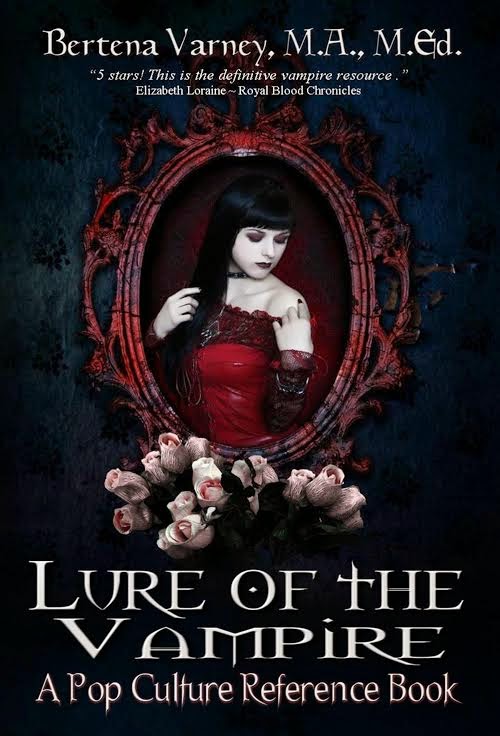 The Lure of the Vampire is a pop culture reference book for writers, vampire fans, students and teachers who love to study the mysterious creature of the night. This book is for the fanatics who sit up at night and watch reruns of Buffy for the hundredth time, the Twi-hards that line up for hours before the show just to glimpse the newest Twilight movie, the Truebies who all knows that “waiting sucks” between each season of True Blood and for those diehard traditionalist that balk at all of this “new” vampire craze.
The Lure of the Vampire is also for the new writers who love creating their own worlds where the vampires may be aristocratic and romantic or dark and dangerous; the world where there are castles, heaving bosoms, chivalry and danger of loving a vampire, the dreams of so many women in today’s world.
And finally, The Lure of the Vampire is a book for those who love to study all aspects of the vampire in both pop culture and the world. Whether they are the historian who loves tracing the evolution of the vampire or the sociologist who wants to explore the world of those that live the lifestyle, the reader will find resources here to help them in their quest for knowledge of this lifestyle.
The Lure of the Vampire is divided into ten sections beginning with mythology and ending with modern vampires. Within each section there are lists that will help the reader learn basic and fun facts about that section’s topic. Links to websites are provided to ensure that the reader may find more information about that section without having to search for it on the Internet or in other books. To help supplement a particular subject within that topic, there are personal essays or interviews that give the reader a personal look from the author’s perspective. For example, Lure of the Dead Boyfriend provides the reader with a look at why women love vampire romance while exploring the vampire as a soul mate, an erotic lover, and an escape from the real world.
Lure of the Vampire provides unique interviews with vampire authors, role players, and those that live the lifestyle. The reader can delve into the world of a creator of an alternate reality or learn more about those whose lives lead them to embrace vampirism as a way of life.
Lure of the Vampire is a complete pop culture reference book for those who enjoy vampires and their impact on society. It provides an extensive bibliography that will allow the reader the opportunity for additional independent study. 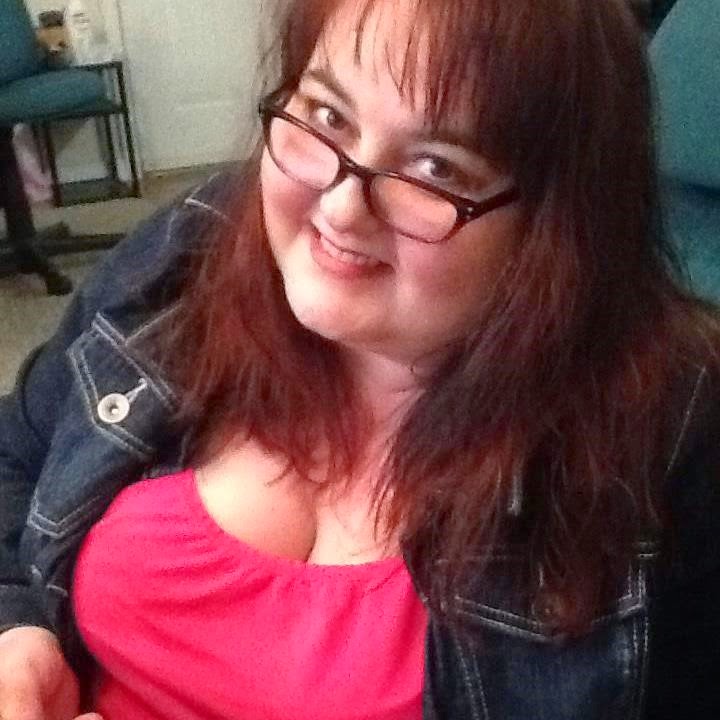 Bertena Varney is a sociology professor at Southcentral KY Community College (SKYCTC)  in Bowling Green, KY. She holds masters’ degrees in sociology, criminology, social science and education. She is from Winchester, KY and attended Morehead State University in KY.
She was named to the Top Women in Horror in 2012 by Venom and Honey and Blaze McRob’s Tales of Terrors in 2014 and has been nicknamed the Vampire Professor.
She is an Amazon and Kindle Bestselling author of Lure of the Vampire and Lure of the Vampire: Revamped. She is also contributor and coeditor for Vampire News: Tasty Bits to Sink Your Fangs Into, Vampire News: The Not So End Times, Vampire News: Really…Vampires Suck!, and contributor to Vampires Romance to Rippers an Anthology of Risque Stories, Vampires Romance to Rippers an Anthology of Tasty Stories, and The Witching Hour and Sirens Compendiums.
She is also the Examiner.com expert on True Blood, vampires, television, movies, and more.
In her free time she does lectures at libraries conventions and conferences. Some of these include the Harry Potter Convention in Salem, Mass., The Sirens Convention in Vail, Colorado, ScareFest Horror Convention in Lexington, as well as smaller events and discussions in New Orleans, Chicago, London, Paris and other fun places.

When writing this book it began as a master’s thesis and then was edited and formatted differently so that vampire fans would enjoy the information as well. Over the last 3 years she has been asked by fans to create a course online, like the one she teaches in person, and that class has finally been created and will be ready to begin when the book becomes available for sale hopefully on August 1.
She is enrolling students now as a 50% discount of the normal class tuition. The special included anyone who participates in this tour will receive the class for only $50.00. It is normally $100.00! Once the student pays for the class via PayPal or credit card and purchases the book, they should email the author to get the invite to the class. The class covers each chapter in the book and provides the student with the questions that they must answer, videos for them to watch, an essay for them to write and final: there are also discussion boards that are open for class discussions. Upon completion the student will receive a certificate of completion via email to show that they have completed a course in Vampirology (the study of vampires).
This is a fun course that vampire fans will love. If interested, please look at course here – http://mysticalparanormalacademy.ning.com/classesoffered/introduction-to-vampires-class. Then  email her at vampireprofessor@yahoo.com or message her Facebook profile – https://www.facebook.com/bertena.varneyto get payment and registration information for the class.

Can anyone guess what her next book is about? Angels!

Soundtrack to the book–

This is the music I listen to while working on my books. It’s a folk rock group that happens to be my son’s group. He wrote the music and lyrics as well as plays the guitar and sings. I loved typing away while he would play music and sing, it was so peaceful. The Group is called Approaching the Unreal – Go to the link below to download the songs for FREE. When it asks how much you are willing to pay put in zero dollars or any amount that you wish to pay to help support these young upcoming artists.  https://approachingtheunreal.bandcamp.com/

Bertena Varney began the journey in creating this book when she was doing her graduate studies. She researched academic databases, interviewed authors, and even did ethnographic research on the subculture of vampires. She is an academic as well as a fan of vampires and has done a great job with blending the two in this book. This is the perfect reference book that is quick grab and covers more than just the typical vampire shows. ~ Layla Cook ~ Fairy Author and Assemblage Artist
The Vampire Professor is the go-to girl and Lure of the Vampire is the go-to book on all things vampire. ~ Scarlette D’Noire ~ Vampires: Romance to Rippers
Bertena gives a fresh and unbiased look at the complex subject of vampires; where most books rehash the same tired notes, she unearths overlooked melodies! ~ Audrey A’Cladh ~ Vampire Minister and Counselor, Vampires: Romance to Rippers

~The Lure of the Dead Boyfriend~
In the beginning was a bald monster with a long face, pointed ears and chin, elongated fingers and sharp talon claws, which lost its humanity and control over its monstrous side. It was lured to a young maiden’s window. All of a sudden, with a sudden rush that could not be foreseen and with a strange howling cry that was enough to awaken the terror in any beast, the figure seized the long tresses of hair. He held her to the bed…she screams…shrieks…and he seizes her neck in his fang like teeth… a gush of blood and a hideous sucking noise follows.
This picture of rape and torture is the bedroom scene of the 1847 penny dreadful, Varney the Vampire: Feast of Blood. The author Thomas Prest painted pictures of the vampire being a sexual monster wanting to devour women, women who were portrayed as being very passive and weak. In these stories the vampire bite was a metaphor for rape and the monster wanted his victim aware of every agonizing violation. This is the vampire that was created when men ruled the horror world: a creature cursed to walk the earth for eternity searching not for love but for food.
Now today, the story reads more like this, “He met my eyes with his penetrating gaze. Suddenly it was hard to breathe. ..My heart pounded in my chest… my knees threatened to buckle. I had never seen such a gorgeous man…something about him felt dark and dangerous and desirable. I lifted my chin to give him better access to my neck. He smiled, showing a hint of fangs.” This excerpt is from Lynda Hilburn’s The Vampire Shrink.  Lynda discussed on her blog that since women have taken over the horror genre the vampire has evolved into a gorgeous, sensuous, sexual, romantic, bad boy of the night.
Even though vampire literature is usually snubbed by many writers and fans, over the last ten years the rise in vampire literature has increased exponentially. Many book reviewers claim that vampire literature displays women as sluts and submissive. This may be true in some series but overall this trend has changed quickly. Many writers such as C.J. Ellisson, author of The Vampire Vacation Series, have developed a strong empowered female character that is a monogamous vampire who loves her human husband. The scenes are hot but very respectful to women and actually show how they may embrace their sexual side without embarrassment.
Many more vampire authors have their female character as empowering and strong. They walk alongside the vampire in their journey rather than being the damsel in distress or the hapless victim of his sexual prowess. The current trend for this new genre of vampire romance literature is one that offers the readers an escape from the pressures of the real world while delivering to them either a soul mate or an erotic lover in the form of a vampire. So, just what is the lure of the dead boyfriend to the modern female reader?
Buy Links for my other books
Romance to Rippers Volume 1 An Anthology of Tasty Stories– http://www.amazon.com/Vampires-Romance-Rippers-Anthology-Stories/dp/1940871018/ref=tmm_pap_title_0?ie=UTF8&qid=1404740763&sr=8-3
Romance to Rippers Volume 2 An Anthology of Risque Stories-
http://www.amazon.com/Vampires-Romance-Rippers-Anthology-Stories/dp/1940871034/ref=tmm_pap_title_0?ie=UTF8&qid=1404579110&sr=8-9
Lillian: A Vampire Tale = a novella- Book 1-written by Elizabeth Loraine based on my characters
http://www.amazon.com/Lillian-vampire-tale-Elizabeth-Loraine-ebook/dp/B00653N3K0/ref=sr_1_2?ie=UTF8&qid=1404579110&sr=8-2&keywords=bertena+varney
Lillian 2- The Mask– a novella- Book 2 written by Elizabeth Loraine based on my characters
http://www.amazon.com/Lillian-vampire-tale-The-Mask-ebook/dp/B0090OOM9C/ref=pd_sim_kstore_1?ie=UTF8&refRID=13ES0NE4WGVFPF24SC12
Lillian 3 to be released in October
Vampire News 2011- Tasty Bits You can Sink Your Fangs Into
Print Link – http://www.amazon.com/Vampire-News-Volume-1-Stavros/dp/0982812140/ref=sr_1_7?ie=UTF8&qid=1404579110&sr=8-7&keywords=bertena+varney
FREE Ebook link – http://bitemereallyhard.com/bite-me-really-hard/download-center/
Vampire News 2: The Not So End Times
Print Link – http://www.amazon.com/Vampire-News-Times-Edition-Volume/dp/0982812159/ref=sr_1_5?ie=UTF8&qid=1404579110&sr=8-5&keywords=bertena+varney
FREE Ebook Link – http://bitemereallyhard.com/bite-me-really-hard/download-center/
Vampire News 3: Vampires….. They Suck!
To be released July 18 here is the FREE Link – http://bitemereallyhard.com/bite-me-really-hard/download-center/
Special Thanks to Scarlette D’ Noire and Indie House Publishing, LLC for helping me with this final edition of Lure and for putting me in contact with Patti Roberts, the awesome cover artist and BZ Hercules who worked tirelessly editing and formatting the book for us. They are an awesome team to work with and are highly professional and recommended.
Thank you to them for making this possible! They are awesome!

Follow the above and I will pick 5 winners for a Free eBook and 1 Winner of a FREE enrollment in the Vampire Class. Winners announced August 15.
a Rafflecopter giveaway

One thought on “Varney, Bertena: Lure of the Vampire: A Pop Culture Reference Book”