When a Beta Roars 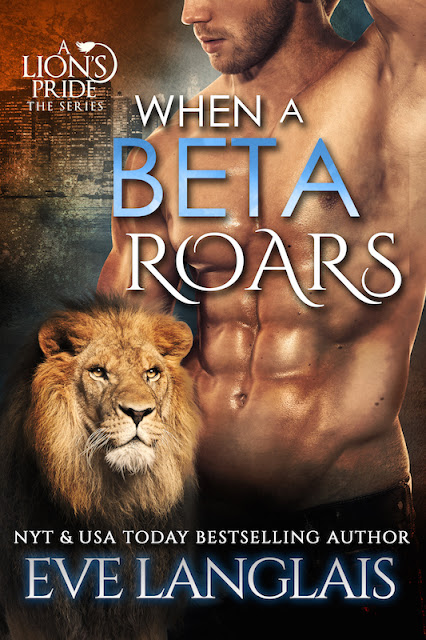 Hayder’s met his mate, there’s just one little problem, she’s allergic to cats.
How degrading. Stuck babysitting a woman because his alpha said so. As Pride Beta, he has better things to do with his time, like washing his impressive mane, hunting down thugs for fun, and chasing tail–sometimes his own if his lion is feeling playful.
But his babysitting job takes an unexpected turn when the woman he’s assigned guard duty over turns out to be his mate.
A female threatened by an outside wolf pack.
A woman he wants to call his own.
A mate who doesn’t fall for his charm.
Usually Beta‘s leave the roaring to the Pride’s alpha, but in this case given his level of frustration, he might have to make an exception. And if anyone doesn’t like it, they can kiss his furry tail.
Rawr!

A hand clasped hers, and the jolt of awareness sucked her from her thoughts as it struck all her senses with lightning strength. Every nerve ending tingled, sensations amplified. She sucked in a breath, and her first impulse was to pull away. However, Hayder wasn’t letting go. On the contrary, his fingers tightened around hers, lacing them together as he tugged her toward the door.

“I—We shouldn’t—But—” Half-hearted protests slid past her lips, none of them complete or coherent, not that he would have listened. He seemed intent on going to dinner, and she was coming with him whether she liked it or not.

She managed to only let the tickle overtake her once in the elevator and ducked her head even as her cheeks heated at the growl that rumbled through him. She wasn’t doing it on purpose. “I’m sorry.”

“Would you stop apologizing?” he snapped.

She didn’t want to anger him so she nodded and kept her head tucked low.

“And stop doing that. You’re not some beaten slave. Hold your head up, baby. Tell me to fuck off.”

The language didn’t shock her and cause the O of surprise. It was his insistence she defend herself.

She shot him a wary gaze, waiting to see the challenging smirk. She knew how this worked. Tell her to do something, and then tear into her because she dared.

“There’s those beautiful eyes,” he teased. “Now keep them up here. I want to see you staring at my face. You’re safe here. Especially with me. You can say what you want. Whatever you want. I would never hurt you.”

Where did that certainty come from? So what if perhaps, thus far, despite their less-than-auspicious introduction, Hayder had shown her nothing but kindness? She didn’t know him well enough to gauge if it was an act. She’d fallen for the lies before. “How do I know I can trust you? How do I know you won’t turn around and hurt me when I do?” The words spilled from her, painful in their honesty, and shocking him into momentary silence.

“Because you can,” was what he finally muttered.

“Of course I can,” she said in a soothing, placating tone. Best to not antagonize him and call his word into question. He might seem sincere, but Harry seemed nice once upon a time too. Don’t fall for his charm. He’ll hurt you too.

How insidious her inner voice proved, cautioning and warning her not to trust so easily. Words were easy. Actions, though, proved much harder, and fists harder still. Honor was easier to break than maintain.

When the doors to the elevator slid open, Hayder, his hand still laced with hers, stepped in to a large lobby. Arabella couldn’t help but stare. When they’d arrived earlier, Jeoff had smuggled her in through an alley at the back, not daring to have her brazenly come through the front doors.

“The longer we keep you hidden, the better chance we have of any trackers abandoning their hunt and leaving you alone.”

It seemed Hayder harbored a much different view. He showed no qualms at all. As nonchalant—and handsome—as ever, he dragged—and, yes, she dug her feet in and tried to stand still—her out onto the marble floor. The wide gleaming expanse boasted a polished mahogany reception desk manned by a security guard in a dark blue uniform. The rest of the floor space was overtaken by a lounge area carefully arranged with leather chairs and divans.

The vast area also contained a multitude of curious eyes, all of them focused on her. Noses twitched. Being the object of so many stares had her tucking in closer to Hayder. He draped an arm around her, tucking her into the comforting strength of his body, which had the unfortunate effect of making her sneeze. Again. And again. And…

When she finished her attempt at breaking a record, she opened tearing eyes to see a half-dozen hands holding out tissues.

“Um, thank you,” she said as she plucked one. She dabbed at her nose one-handed since Hayder still hadn’t relinquished his grip. Brave man considering she’d only barely missed his shoes during her latest spell.

“Hey, Hayder, whatcha doing holding hands with a wolf in cat territory?” At the shouted question, the hum in the room quelled.

Damn, she’d forgotten for a moment she was surrounded by shifters. Lionesses to be exact, the true hunters in any pride. Vicious felines she wouldn’t stand a chance against, especially with her wolf in hiding.

“She better not pee in the halls. I hear their kind like to do that you know.”

“No they don’t,” said a young girl with rainbow-streaked hair. “It’s trees and fire hydrants you gotta watch out for.”

A woman with a ring in her nose snorted. “You’re all idiots. Those are the spots dogs mark. She’s a wolf, and you’re scaring the crap out of her.” Blue eyes, set in a face creased with age, turned to face her. The woman spoke to her soothingly. “Don’t worry about what they’re saying. We’re allies. You’ll come to no harm among us.”

“Unless you pee in the halls.”

“Or eat the last piece of cake.” Someone poked the chubby speaker in the side, and she whirled with a, “What? Just saying what we’re all thinking.”

“Forget thinking. It’s obvious it hurts too much,” yet another lioness muttered. “What I’d like to know, the smart questions here are, who is this girl, and what is she doing here?”

In a panic, Arabella peered up at her guard. Should she answer, and what should she say? Give the truth or spout a lie? Or would lying be worse? What if Hayder and his alpha had already established an identity for her? What—

Hayder saved her from answering. “Ladies—”

Snickers. “He called us ladies.”

“Yeah, he’s the hottie in the tight jeans who sings in that band.”

The matronly one, who asked who Arabella was, sighed as she planted her hands on her hips. “Would you all shut up? Some of us are trying to get answers here. I sense something juicy, so zip it before I do something that requires you getting your jaw wired shut.”

Funny how they all quieted, and yet none of them looked cowed at the threat. They were all, however, united in their curious stares aimed at her.

When Arabella would have tucked behind Hayder’s back to make herself less of a visual target, he pulled her forward and stood her before him, one hand on each shoulder, anchoring her in place. “Jeoff asked the pride to lend its protection. Some assholes want to force Arabella here into marrying some dick so he can get his hands on her fortune. There’s also talk of killing her once the paperwork is done. I don’t think we should allow that.”

As summaries went, it was accurate and succinct. What she didn’t expect was the outrage and…support?

Forget the cowed women of her old pack. The females surrounding her all bore a challenging glint in their eye and boastful suggestions.

“Let them come and try to take her. We’ll show them what women’s lib is all about,” one of them shouted.

“Woo hoo! A new fur coat and in time for winter,” another hollered.

“Someone make sure we replaced the mop from the last time we had to show someone a lesson.”

“Luna, we need to make an appointment to get our nails sharpened.”

Arabella blinked, several times, but she somehow resisted the urge to jam a finger in her ear and wiggle. Why bother? It wasn’t her ears that were defective. Either she’d finally snapped, or she surely dreamed. It was the only explanation for the insanity she’d encountered since her arrival.

More than likely, she’d fallen asleep in her old prison and dreamed everything from the rescue to the improbability surrounding her.

But what a dream. If only it were true. And if only she had an ounce of their courage so she could face her old pack and fight for her right to make her own choices.

The faint whimper and reminder quelled any exhilaration she might have briefly felt. While their spirit and intentions were good, reality was another thing.

Apparently Hayder thought so, too, because he said, “Now, now, ladies. No starting any shit.”

It seemed Hayder wasn’t done. “I mean it. No starting trouble, but you can taunt. Taunt loud. Taunt mercilessly. Drive them to the brink and make them hit first. Then you can bring it. Just be sure to save a piece of those curs for me. I’ve got a few words my knuckles would like to say.” He shook a fist as his utterly male announcement was met with cheers and fist pumps.

They’re nuts. All of them.Or high on catnip.

Something was obviously whacky about their enthusiasm. Even her old pack never planned for mayhem with such glee.

It was to an excited hum—and talk of nail-filing methods—that Hayder once again dragged her, this time toward the glass doors at the front of the building.

She tried one last-ditch protest. “We shouldn’t go out. We’ll order in.”

He halted. “You mean go back up to your condo where we’ll be alone, just you, and me, and”—he purred—“chow down on takeout Chinese food while we watch Indiana Jones?”

She couldn’t help but gape at him.

“Were you expecting me to say something else?”

Hello, my name is Eve and I am a Canadian author who loves to write hot romance, usually with werewolves, cyborgs or aliens.
I should warn you that I possess a twisted imagination and a sarcastic sense of humor something I like to let loose in my writing. I enjoy strong alpha males, and shifters. Lots of big, overprotective shifters. I am also extremely partial to aliens, the kind who like to abduct humans and then drive them insane…with pleasure. Do you like something a little darker? Then check out my cyborgs whose battle with humanity have captivated readers worldwide.
I love to write, and while I don’t always know what my mind is going to come up with next, I can promise it will be fun, probably humorous and most of all romantic, because I love a happily ever after.